Thinaah booked their spots in the semi-finals of the Indian Open in style yesterday.

The victories were even sweeter as both pairs had come under fire following early exits in the Malaysian Open last week.

World No. 3 Aaron-Wooi Yik had suffered a disappointing loss in the second round to China’s world No. 5 Liu Yuchen-Ou Xuanyi while French Open champions Pearly-Thinaah fell in the first round to Bulgarian sisters and world No. 12 Gabriela Stoeva-Stefani Stoeva.

Rexy was happy with the response shown by his charges after the losses.

“I thank God as we had prayed hard for both pairs to deliver good runs in India.

“I must congratulate them for their wins and I want them to enjoy every step and every round after this,” said Rexy.

Aaron-Wooi Yik will likely face world No. 1 and Malaysian Open champions Fajar Alfian-Rian Ardianto of Indonesia for a place in the final today.

Fajar-Rian were involved in a late quarter-final match against Germany’s world No. 17 Mark Lamsfuss-Marvin Seidel.

Pearly-Thinaah could also have a tough task against Japan’s world No. 2 Nami Matsuyama-Chiharu Shida.

“We gave them a good fight but we still have a lot to improve on like our consistency on court.

“We can’t afford to make simple mistakes and give away easy points,” said Ee Wei, who was playing in only her fourth tournament with Tang Jie after the duo were paired together in November. (Malaysians only)Quarter-finals 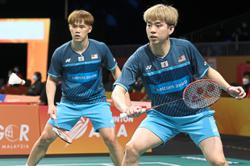