No easy task for Jin Wei in Wales 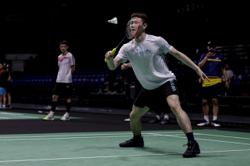 PETALING JAYA: Independent women’s singles shuttler Goh Jin Wei will not have it easy in the Welsh International Championships, even though it’s a lower-tier competition.

The championships, which starts in Cardiff today, still has a dangerous player in one of Denmark’s top shuttlers, Mia Blichfeldt, who is the top seed in the tournament.

Jin Wei though, has been drawn in the opposite half of the draw and will only meet her if both reach the final.

Before that, Jin Wei could face a tricky test against second seed Yvonne Li of Germany in the last-four.

The 22-year-old, who is seeded fifth, should get past Italy’s Sabrina Solis in the first round.

Unseeded Abigail Holden of England and fourth seed Kristin Kuuba of Estonia could be Jin Wei’s opponents in the second round and quarter-finals respectively.

“She needs time to train for next year,” said Nova.

Jin Wei is now ranked No. 37 in the world and Nova wants his charge to reach at least No. 34 by the end of the year to stand a chance of qualifying for the prestigious Malaysian Open from Jan 10-15.

Only those in the top 32 will make the cut but Jin Wei could still squeeze in.

“Jin Wei could still play in the Malaysian Open as she could be the third or fourth reserve. For now, the plan is for her to break into the top 32 by the end of April, so she can automatically qualify for higher-tier tournaments ahead of the qualifying period for the 2024 Paris Olympics in May,” said Nova.