PETALING JAYA: National mixed doubles pair Hoo Pang Ron-Toh Ee Wei have withdrawn from the Australian Open which starts on Tuesday in Sydney to give more focus to the Malaysian Open from Jan 10-15 at the Axiata Arena.

“Pang Ron-Ee Wei will not be playing in the Australian Open. We want to prepare them for the Malaysian Open next year,” confirmed national doubles coaching director Rexy Mainaky.

Pang Ron-Ee Wei, who were only paired together in June, had suffered a dip in form in their last two tournaments after a promising start to their partnership.

They had suffered back-to-back opening round exits in the French and Hylo Opens.

Before the two tournaments, they were forced to miss the Denmark Open after Pang Ron had an eye infection.

Pang Ron-Ee Wei put up a much better fight in the Hylo Open against independent pair and world No. 11 Goh Soon Huat-Shevon Lai Jemie but it was not enough as they narrowly lost 11-21, 21-12, 17-21.

The former had beaten the latter in the second round of the Indonesian Open in June.

Despite the losses, Pang Ron-Ee Wei have gone up three rungs from No. 37 to 34 in the latest world rankings.

The Malaysian Open does offer more ranking points as it’s a higher-tier tournament than the Australian Open.

The home tourney has been upgraded from Super 750 to 1000 by the Badminton World Federation (BWF).

Tien Ci-Chiew Sien will play a qualifier in the opening round. 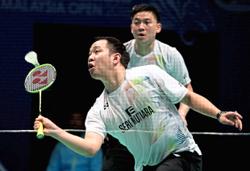