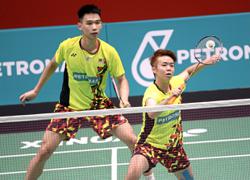 No spark: Chen Tang Jie was paired with Valeree Siow (right) after the SEA Games but the duo only played for two months.

Tang Jie will be embarking on his third partnership this year after previously combining with Peck Yen Wei and Valeree Siow.

“I had discussions with doubles coaching director Rexy Mainaky and mixed doubles coach Teo Kok Siang and we agreed on Yap Ling being my new partner,” said Tang Jie. “I requested for Yap Ling as I feel we can be compatible. Both of us use our height advantage and power in our games. So, this could help us combine well.”

The 24-year-old is now out to repay his coaches’ belief in him and hit the ground running with Yap Ling.

“I’m really thankful to my coaches for taking my opinion into consideration,” said Tang Jie.

“Yap Ling and I will prepare for the Australian Open (Nov 15-20). We’ll work on our partnership and try to get a good result to repay our coaches.

Yap Ling had previously been playing in the women’s doubles with Go Pei Kee.

“She will need time to get used to playing in the mixed doubles. She has played in mixed doubles before but never on a consistent basis and in higher-tier tournaments. But I believe that she can adapt well,” said Tang Jie.

The Perak-born is determined to have a successful partnership with Yap Ling after not quite hitting it off with Yen Wei and Valeree.

Tang Jie’s best achievement in more than four years with Yen Wei was capturing gold in the Hanoi SEA Games in May.

In the World Tour events, the duo’s best was a runners-up finish in the Indian Open in January.

Tang Jie was paired with Valeree after the SEA Games but the duo only played for two months before the former was given a final shot to prove himself with Yen Wei at the World Championships and Japan Open in August.

Tang Jie and Yen Wei though, failed to get past the early rounds in both tournaments. 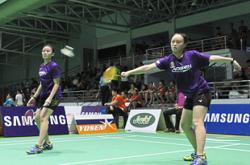