The Indonesian, while happy with the huge improvement shown by the world No. 42 following his stunning performances at the Birmingham Commonwealth Games, knows from experience that the road ahead is full of pitfalls.

“The biggest challenge for Tze Yong is dealing with the increased attention and expectations when he does well.

“His performances have improved a lot but this does not mean that the road ahead will be smooth sailing. There will be times when he will struggle,” said the former world champion.

“This is the same for everyone, including me when I was a player and Lee Zii Jia. So he needs to be prepared to go through this.”

The experienced coach, who had overseen the likes of Datuk Lee Chong Wei and Zii Jia before the latter turned professional, is pleased though by the 22-year-old Tze Yong’s commitment in training.

“Honestly, I saw much improvement in him in training in the weeks leading up to the Games, which led to his good performances.

“He showed great desire, commitment and his quality went up a notch. It’s not about skills or technique but his hunger to do well which is really important,” added Hendrawan.

Hendrawan wants Tze Yong to keep up his good work as he prepares him for his next big challenge – the World Championships in Tokyo from Aug 21-28.

The youngster will be making his debut and Hendrawan just wants him to play his best.

“Just like in the Commonwealth Games, Tze Yong has got a last-minute opportunity to participate in a major tournament. We have not set any specific targets for him. Regardless of who he faces, the most important thing is for him to try to bring out his best game and then anything can happen,” said Hendrawan.

Meanwhile, Hendrawan admitted that it was no easy task for him and singles coaching director Wong Choong Hann to find two able back-ups for Tze Yong within six months.

Both the coaches had been given the ultimatum by the Badminton Association of Malaysia (BAM) president Tan Sri Norza Zakaria.

“It’s not an easy task. As coaches, we’re always looking to improve our players. But it also depends on them. For example, we can see more maturity from Tze Yong but the others have not shown this yet.

“Coaches and players must want the same thing to succeed,” said Hendrawan. 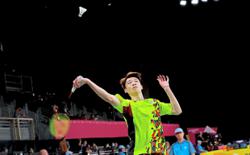