PETALING JAYA: A chance to start all over again or an end for good.

Shuttlers Chen Tang Jie-Peck Yen Wei have finally been given an ultimatum to either perform well in the World Championships in Tokyo from Aug 21-28 or forget about any opportunity of being paired up together in future.

World No. 28 Tang Jie-Yen Wei, who were split up after they won the gold medal at the Hanoi SEA Games in May, will reunite for the world meet after they qualified as the third pair behind independent combinations Tan Kian Meng-Lai Pei Jing (No. 11) and Goh Soon Huat-Shevon Lai Jemie (No. 14).

They have also been entered for the Japan Open in Osaka from Aug 30-Sept 5.

“If they produce a good result, we will continue with their partnership.

“If they don’t, we will then pull them out of the Japan Open and split them up for good.”

Tang Jie-Yen Wei face a tough task to prove themselves as a pair in the world meet as they are likely to be up against China’s Tokyo Olympic Games champions Wang Yilyu-Huang Dongping in the second round.

The Malaysians had lost to the Chinese pair in their only encounter so far in the Asian Cham–pionships in April.

Losing to them again could spell the end of their partnership with Tang Jie likely to be paired again with Valeree Siow and Yen Wei with Choong Hon Jian.

A win will most probably pit the Malaysians against China’s formidable world No. 1 pair Zheng Siwei-Huang Yaqiong in the quarter-finals.

Soon Huat-Shevon could also face a tricky task in the third round against world No. 9 Thom Gicquel-Delphine Delrue of France. 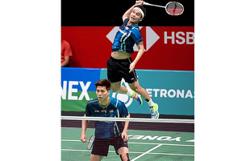