All pumped up: Pearly Tan (right) and M. Thinaah are on fire after winning the Common­wealth Games gold in Birmingham. — AFP

PETALING JAYA: No women shuttlers have done it – to win a medal at the World Championships.

Can national No. 1 women’s doubles pair Pearly Tan-M. Thinaah break the norm and become the country’s first medal winner at this upcoming edition in Tokyo from Aug 21-28?

No Malaysia women pair have gone beyond the quarter-finals.

In fact the last Malaysia pair who made it to the last eight stage was Amelia Anscelly-Soong Fie Cho at the Jakarta edition in 2015.

Pearly-Thinaah are certainly on fire after winning the Commonwealth Games gold in Birmingham but the duo will have to upset at least two pairs in the top10 of the world rankings to create history at the world championships.

The world No. 11 are likely to be up against Japan’s world No. 5 Nami Matsuyama-Chiharu Shida as early as the third round.

Pearly-Thinaah have never beaten the Japanese pair in their past five meetings.

If they finally manage to break their duck against Nami-Chiharu, they could meet either Korea’s Kim So-yeong-Kong Hee-yong (No. 4) or Jeong Na-eun-Kim Hye-jeong (No. 10) in the quarter-finals.

Despite the huge challenge facing Pearly-Thinaah, national doubles coaching director Rexy Mainaky is hoping that his charges will continue the fine form shown in the Commonwealth Games.

“I hope they can deliver the same performances that they did in Birmingham,” said Rexy.

“I want them to try and upset a few of the higher-ranked pairs they will face.”

Anna-Mei Xing who had been steadily improving with two back-to-back quarter-final finishes at the Malaysian Open and Masters last month, will likely lock horns with Jeong-Kim in the second round.

The Malaysians face a tough task against the Korean pair, having lost to them in straight games in the Malaysian Masters.

The winners of the tie will take on Pearly-Thinaah in the second round.

Vivian-Chiew Sien are set to play Germany’s world No. 26 Linda Efler-Isabel Lohau in the first round. 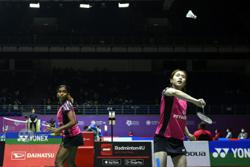