Good vibes: Malaysia’s Goh V Shem (left) and Tan Wee Kiong fancy their chances for a medal at the World Championships in Tokyo.

PETALING JAYA: They are one of the veteran pairs but Goh V Shem-Tan Wee Kiong may just spring a surprise in the World Championships in Tokyo from Aug 21-28.

Wee Kiong is feeling optimistic about their medal chances despite being handed a challenging draw.

Wee Kiong and V Shem, who made the cut as the country’s fourth ranked pair at No. 15 in the world, are slated to meet newly crowned Birmingham Commonwealth Games champions Satwiksairaj Rankireddy-Chirag Shetty of India in the third round.

If they can pull it off, the independent pair could be up against Japan’s defending champions Takuro Hoki-Yugo Kobayashi in the quarter-finals.

The Malaysian pair have received a first-round bye and will likely play Denmark’s Jeppe Bay-Lasse Molhede in the second round.

Wee Kiong feels he and V Shem have an opportunity to secure a podium finish.

“Winning a medal here has always been my target. I think everyone stands a chance to win,” said Wee Kiong whose best performance was in last year’s edition in Huelva, Spain, where they reached the quarter-finals before losing to eventual runners-up He Jiting-Tan Qiang of China.

Meanwhile, the other national pairs looking to make a good impression are Aaron Chia-Soh Wooi Yik (No. 6), Ong Yew Sin-Teo Ee Yi (No. 10) and Goh Sze Fei-Nur Izzuddin Rumsani (No. 12).

Aaron-Wooi Yik and Sze Fei-Izzuddin are headed for a third-round clash barring any upsets.

The former are likely to play Taiwan’s world No. 24 Lu Ching Yao-Yang Po Han in the second round while the latter should have little trouble overcoming unheralded Irish pair Joshua Magee-Paul Reynolds.

A win could pit them against Denmark’s world No. 8 Kim Astrup-Anders Skaarup Rasmussen in the third round. 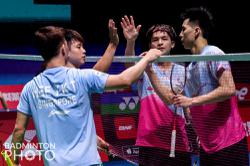