Next up: Valeree and Tang Jie will take on Hong Kong’s Reginald Lee-Ng Tsz Yau in the second round.

The pair, playing in only their fifth tournament together, have reached the last eight once before in the Indonesian Open after receiving a walkover in the second round.

They are now looking to at least match that achievement in Singapore.

“Anything can happen in the match today. We’ll give it our all to achieve our target,” vowed Valeree.

Valeree-Tang Jie were drawn to take on Hong Kong’s world No. 88 Reginald Lee Chun Hei-Ng Tsz Yau in the second round today.

Meanwhile, three other national pairs joined Tang Jie-Valeree in the second round.

Hoo Pang Ron-Toh Ee Wei overcame Germany’s Jones Jansen-Linda Efler 23-21, 21-16 but they have a tough task in the next round as they are up against Denmark’s world No. 13 Mathias Christiansen-Alexandra Boje.

Peng Soon-Yee See had also got the better of their compatriots in the first round of the Indonesian Masters last month.

Independent pair Goh Soon Huat-Shevon Lai Jemie did not need to lift their racquet to reach the second round after Taiwan’s Yang Po-hsuan-Hu Ling-fang conceded a walkover.

The Indonesians dashed the hopes of another independent pair Wong Tien Ci-Lim Chiew Sien with a 21-14, 21-16 win.

It was also all over for Choong Hon Jian-Peck Yen Wei who found Thailand’s world No. 2 Dechapol Puavaranukroh-Sapsiree Taerattanachai too hot to handle and went down 16-21, 12-21.

In women’s doubles, Chiew Sien made amends for her loss in the mixed by combining with Vivian Hoo to beat Thailand’s unheralded Kittipak Dubthuk-Prinda Pattanawaritthipan 21-18, 21-16.

They will meet Japan’s Sayaka Hobara-Suzuki Hinata next. 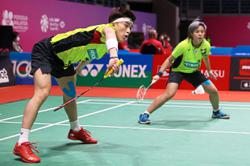