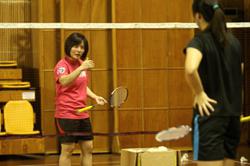 WILL familiarity with an opponent be a boon or a bane for women’s singles shuttler Goh Jin Wei (pic) today?

Whichever way it turns out, the 22-year-old, who is the country’s sole women’s singles representative in the Malaysian Masters, is looking forward to taking on her training partner Zhang Beiwen of the United States in the first round.

World No. 16 Beiwen had recently been training with the independent shuttler and the Malaysian is hoping to learn more from her in their clash.

“I think it will be a good match and I hope to learn more from her through this meeting,” said Jin Wei, who is currently ranked 69th.

On whether her experience of training with Beiwen could prove beneficial in the match, Jin Wei said: I don’t think I will hold any advantage as she will have learned about my game and weaknesses too.”

Yesterday, Jin Wei, who was promoted from the reserve list to the qualifying round after several withdrawals, got off to a good start when she beat India’s 50th ranked Malvika Bansod 21-10, 21-17 in just 33 minutes.

Jin Wei was happy she got to play at the eleventh hour after being a ‘’cheerleader’’ in the recently concluded Malaysian Open.

“It feels great to get to play here. I was checking the updates of the players withdrawing and was surprised to be promoted as I was number 20 something on the reserve list.

‘’In the Malaysian Open, I was a supporter and was quite overwhelmed by the huge support from the fans. So, now it’s nice to receive the support as a player.”

The 22-year-old is hoping to perform well to give herself a boost ahead of the Commonwealth Games in Birmingham from July 28-Aug 8.

She has one more tournament after this to fine-tune her preparations for the Games – the Taiwan Open from July 19-24.