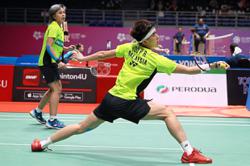 THAILAND’S world No. 2 mixed doubles pair Dechapol Puavara-nukroh-Sapsiree Taerattanachai need to be prepared to overcome a growing number of challengers if they are to defend their world title this year.

Dechapol and Sapsiree had created history by becoming the first Thai pair to capture the world title last year in Huelva, Spain.

The victory had come after a stunning run of form that made them virtually unbeatable and win six titles in a row including the prestigious World Tour Finals.

Their form also catapulted them to No. 1 in the world ranking.

But this year, there have been cracks in the Thai pair’s armour which other pairs, led by China’s Zheng Siwei-Huang Yaqiong, are only too happy to exploit.

In the Masters, they were stunned by world No. 10 Thom Gicquel-Delphine Delrue of France while national pair Goh Soon Huat-Shevon Lai Jemie (No. 14) upset them in the Indonesian Open.

The defeats followed an agonising loss to Siwei-Yaqiong in the final of the Thailand Open in May.

Before that, the reigning world champions also had their run halted in the semi-finals of the All-England in March by Japan’s world No. 3 Yuta Watanabe-Arisa Higashino.

All the pairs who ousted the Thais will pose a threat to them on the world stage and will attempt to dethrone them.

Additionally, China’s Tokyo Olympic Games champions Wang Yilyu-Huang Dongping will also be one of the pairs to look out for despite their inconsistent form after their gold-medal feat.

But Dechapol and Sapsiree are unfazed by all their challengers and prefer to focus on their own game.

“The most important thing for us is to focus on every match and play our best. We also need to know our mistakes and correct them,” said Sapsiree.

Dechapol-Sapsiree will face Yilyu-Dongping in the semi-finals of the Malaysian Open today after sweeping aside Hong Kong’s world No. 7 Tang Chun Man-Tse Ying Suet 21-13, 21-14 in the quarter finals.

The head-to-head record is in favour of the Chinese pair who have come out on top eight times in 14 meetings.

But Dechapol-Sapsiree did beat the world No. 4 pair in their last meeting in the semi-finals of the Thailand Open.

The other semi-final will be between Siwei-Yaqiong and Denmark’s Mathias Christiansen-Alexandra Boje.