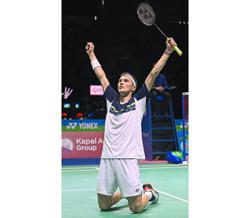 ALL is not lost for five Japanese players who had contracted Covid-19 during the Indo-nesian Open in Jakarta last week to see action in the Malaysian Open.

The Nippon Badminton Association, in a statement, have confirmed that the players were positive during the Indonesian Open.

Based on the standard operating procedures, a player who tests positive must undergo a five-day quarantine. The player would be able to play if the RTD antigen result is negative on the fifth day.

The Badminton Association of Malaysia secretary Datuk Kenny Goh said the eligibility of the players would be known today. “The players need to undergo a five-day quarantine. Most likely there will be a decision during the team managers’ meeting,” said Kenny.

The first round matches will be spread over two days and if the players are scheduled to play on Wednesday, there is a possibility of them seeing action.