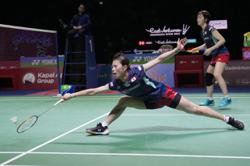 On track: Pearly Tan (back) and M. Thinaah beat Indonesia’s Febriana Kusuma-Amalia Pratiwi 21-18, 21-19 in just 39 minutes to march into the second round. — Bernama

PETALING JAYA: Pearly Tan-M. Thinaah are riding high on confidence after breaking into the top 10 in the world.

The duo, who moved up one rung in the standings after a flawless performance in the just concluded Uber Cup Finals, continued their fine form in the Thailand Open, which started yesterday at Impact Arena in Bangkok.

Pearly-Thinaah stayed steady to beat Indonesia’s Febriana Kusuma-Amalia Pratiwi 21-18, 21-19 in just 39 minutes to march into the second round.

They will face the winners of the match between Liu Xuan-xuan-Xia Yuting of China and Lee Hsia-chin-Teng Chun-hsun of Taiwan for a place in the quarter-finals.

Pearly was delighted to break into the top 10 bracket.

“I feel so happy because it’s one of my small dreams. I also feel lucky and blessed because I’ve gotten a lot of chance to play in big tournaments and gain experience to be able to get into top 10,” said Pearly.

“I have to thank my partner and coaches for the trust they have in me and always support me during my ups and down.

“There are still a lot of areas that we need to improve but the goal is to be consistent, because the standard of those in the top 10 is different,” added Pearly, who is happy they cleared the opening round in the Thai Open.

National coaching doubles director Rexy Mainaky was pleased with Pearly-Thinaah’s performance and wants them to capitalise on their current hot form.

“They were solid and aggressive. Hopefully, they can go far in this tournament,” said Rexy.

Anna Cheong-Teoh Mei Xing also made it to next round when they pulled off a 21-5, 21-18 win over Indonesia’s Fitriani Fitriani-Ruselli Hartawan to set up a match against Baek Ha-na-Lee Yi-lim of South Korea.

While the women’s doubles were flying high, the men’s singles trio of Cheam June Wei, Soong Joo Ven and Aidil Sholeh Ali Sadikin flopped in the first round of the qualifying tournament.

June Wei lost 11-21 in the first game against Germany’s Max Weisskirchen and pulled out in the second due to injury.

Malaysia will be counting on Lee Zii Jia, Ng Tze Yong and veteran Liew Daren to keep the flag flying.

In the men’s doubles, Nur Azriyn Ayub-Lim Khim Wah fought tooth and nail to oust England’s Rory Easton-Zach Russ 16-21, 23-21, 22-20 in the qualifying round while Tan Kian Meng-Tan Wee Kiong found Denmark’s experienced pair Kim Astrup-Anders Skaarup too hot to handle and lost 8-21, 16-21 in the first round.

Azriyn Ayub-Khim Wah will next face Danes Jeppe Bay and Lasse Molhede in the first round. 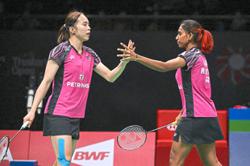