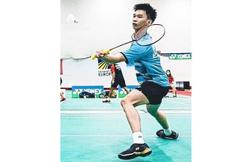 PETALING JAYA: National men’s doubles pair Man Wei Chong-Tee Kai Wun have made it to their first ever World Tour semi-finals in grand fashion after knocking out former All-England champions Ivan Sozonov-Vladimir Ivanov of Russia at the Syed Modi International.

The world No. 65 outclassed Ivanov-Sozonov, the world No. 15, 21-13, 21-12 in just 26 minutes to put themselves in prime position for their career breakthrough victory in Lucknow.

Hopes are high on Wei Chong-Kai Wun to build on their burgeoning partnership and narrow the gap on the two elite pairs – world No. 7 Aaron Chia-Soh Wooi Yik and No. 17 Nur Izzuddin Rumsani-Goh Sze Fei – by continuing to climb up the world ranking.

And there’s certainly a good chance for them to win this week following a spate of withdrawals that included last week’s Indian Open winners Satwiksairaj Rankireddy-Chirag Shetty and Manu Attri-B. Sumeeth Reddy.

Wei Chong-Kai Wun will face either Fabien Delrue-William Villeger of France or M. R. Arjun-Dhruv Kapila for a place in the final tomorrow.

Anna Cheong-Teoh Mei Xing are also just two wins away from their first World Tour breakthrough after sealing a place in the last four without having to lift their racquets.

They were given a walkover by Ramya Venkatesh-Apeksha Nayak.

In the mixed doubles, Chen Tang Jie-Peck Yen Wei were forced to withdraw from their quarter-final match against Hema Nagendra-Srivedya Gurazada of India after the former fell ill.

“We have decided to pull Tang Jie out as he was not feeling well. I think there’s certainly a need for us to review our players’ participation in Lucknow as the number of Covid-19 positive cases are very high there,” said BAM secretary Datuk Kenny Goh.