All to play four: Yuta Watanabe-Arisa Higashino are on the brink of winning their fourth title of the season in Bali today.

PETALING JAYA: As our shuttlers continue to find success hard to come by on the World Tour, their Japanese rivals just keep thriving under former national coaches Tan Kim Her and Jeremy Gan.

World No. 4 mixed doubles pair Yuta Watanabe-Arisa Higashino, handled by Jeremy since 2018, are on the brink of winning their fourth title of the season after reaching Indonesian Open final in Bali yesterday.

The duo faced little trouble as they ousted Denmark’s Mathias Christiansen-Alexandra Boje 21-16, 21-12 in just 39 minutes to set up a title clash with Thailand’s Dechapol Puavaranukroh-Sapsiree Taerattanachai.

Watanabe-Higashino will be eager to make amends after exiting the Indonesian Masters semi-finals last week that prevented them from making it four titles on the trot.

Having captured the All-England in March, they also pipped Dechapol-Sapsiree to the Denmark Open crown and Christiansen-Boje at the French Open final in October.

Should they lift the title today, Watanabe-Higashino will create history as the first Japanese pair to win the mixed doubles competition in the Indonesian Open since its inception in 1982.

But their opponents and world No. 2 Dechapol-Sapsiree are no pushovers.

They have also been going great guns by triumphing twice in three finals, winning the Hylo Open in Germany and Indonesian Masters back-to-back.

Kim Her has also whipped up new world-beaters to replace Japan’s retired seniors.

World No. 7 Takuro Hoki-Yugo Kobayashi have continued their impressive run by reaching the third final in four outings after ending compatriots Akira Koga-Taichi Saito’s gallant run with a 22-20, 21-14 win.

This sets up a repeat of last week’s Indonesian Masters final with the Japanese seeking to break Indonesia’s world No. 1 Kevin Sanjaya-Marcus Fernaldi for the second straight tournament.

Hoki-Kobayashi’s triumph last week shattered Kevin-Marcus’ hopes of winning their fourth successive title and they will be out to do the same to deny the latters’ bid of completing a three-peat at the Indonesian Open.

Kevin-Marcus were in fiery form as they eliminated India’s Satwiksairaj Rankireddy-Chirag Shetty 21-16, 21-18 in the other semi-finals. 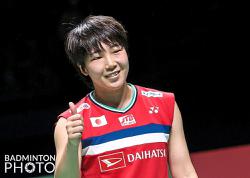 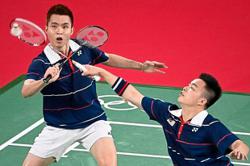