Punished but not finished

Ready to soldier on: Cheam June Wei in action for Malaysia against Japan in the Thomas Cup Finals in Aarhus, Denmark. — AP

PETALING JAYA: It’s demoralising to be sent back home after failure to meet one’s target.

But that’s exactly what has happened to singles shuttler Cheam June Wei after he lost in the quarter-finals of the Czech Open and limped out of the Belgium International with an ankle injury last month.

In the same two international tournaments, his junior Ng Tze Yong emerged as the runners-up and champion respectively.

The Badminton Association of Malaysia (BAM) decided to withdraw June Wei from three International Challenge tournaments in Europe - Ireland (Nov 17-20), Scotland (Nov 25-28) and Wales (Dec 1-4) and he is back in Kuala Lumpur.

Although disappointed that he did not win a title during his European stint, the 24-year-old June Wei has vowed to soldier on.

“I was supposed to continue playing in Ireland, Scotland and Wales but a decision has been made to send me back home,” said June Wei.

“I didn’t hit the KPI (key performance index) set for me as I lost in the Czech Open.

“I hurt my ankle in Belgium and that’s why I retired. I’ve recovered as it only took a week to heal. Overall, I thought I didn’t play too bad but it was not good enough.”

June Wei also took part in the Thomas Cup Finals in Aarhus, Denmark, as the second singles. He was only fielded in the group ties against Canada and Japan. He beat Jason Anthony Ho-Shue 21-14, 21-14 but lost 20-22, 13-21 to Kanta Tsuneyama.

The world No. 71 will spend time in training to work on his game.

“I’ll wait for the coaches to decide on my next assignment. For now, I’m still motivated to do well in badminton.”

Due to his low ranking, June Wei will not be able to compete in the higher-ranked tournaments - the Indonesian Masters and Indonesian Open this month. With few tournaments left before the year end, June Wei’s world ranking is set to drop again.

He is currently ranked fourth in the country behind Lee Zii Jia (8), Liew Daren (34) and Tze Yong (68), who overtook June Wei after moving six rungs in the latest ranking list. 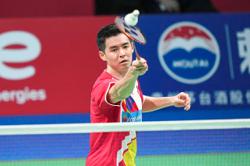