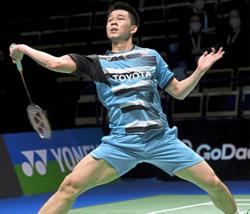 PETALING JAYA: Malaysia can expect a whipping from China in their Group D tie of the Uber Cup Finals today.

Despite fielding a weaker team by resting all their Olympic Games medallists, China got off to a brilliant start in their opening tie when they thrashed Canada 5-0 without much problems and they did it all under three hours.

The Malaysian girls will stand no chance to collect even a point and it will be best to give their reserves an opportunity to play.

They can rest national No. 1 S. Kisona and field Eoon Qi Xuan (pic), K. Letshanaa and Siti Nurshuhaini Azman in the singles and allow Go Pei Kee an opportunity to play in the doubles.

National coaching director Wong Choong Hann admitted that China were a class above and hoped their younger players would gain as much experience as possible.

“China have depth in the team but we don’t. I expect the girls to give their best and see where they stand against their experienced opponents,” said Choong Hann.

Meanwhile, in another Group A Uber Cup Finals match, Indonesia dropped one point en route to winning 4-1 against Germany.