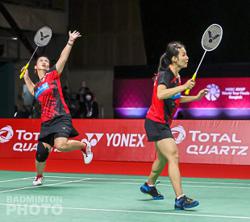 (From left) Lee Meng Yean, Soniia Cheah and Chow Mei Kuan took their time off to take photo with the Olympic rings in the Games Village

But the 26-year-old debutant will not let that dampen her spirit as she and Lee Meng Yean gear up for Group A’s crucial opener against Indonesia’s Greysia Polii-Apriyani Rahayu at the Musashino Forest Sports Plaza on Saturday.

“Yes we have heard about it but we don’t know exactly from which part of the Games Village these cases were from,” said Mei Kuan.

“We’re sharing the same block of apartment with athletes from China and Indonesia.

“It’s worrying for sure but we can just do what’s within our control like keeping our mask on and sanitising our hands frequently to minimise the infection risk.

“We’re sticking together all the time and looking after each other. The most important thing is we try to avoid crowded places where ever possible. There’s a gym made available for us but we choose not to go and when we go for our meal at the canteen, we will find one corner and dine there.”

Despite the gloomy atmosphere, Mei Kuan is trying to enjoy her first Games experience.

She took some time off to roam around the Games village with teammates and take a photograph with the iconic Olympic rings.

“It’s been quite pleasant so far. Everything has gone smoothly since the day we arrived,” said Mei Kuan.

“It would be way better had it not been for Covid-19. It’s a shame that we could not really mingle around with athletes from other contingents. The Olympics is one of the Games that we have the opportunities to see other famous sport stars in person.

“I have not been able to see any so far as many of them probably opted to stay outside the Games village.”

Mei Kuan said she and Meng Yean are all pumped up despite being handed tough openers against the top two favourites in Group A.

After Friday’s battle with world No. 6 Greysia-Apriyani, awaiting them the next day are world No. 1 Yuki Fukushima-Sayaka Hirota of Japan.

Their final match will be against No. 14 Lauren Smith-Chloe Birch of Great Britain.

“We’re ready to face whoever, regardless of the match order. We treat every single match as equally important and try to win them because it’s only wins that will take you through the next round,” said Mei Kuan.

“It looks tough, but nothing is impossible. We will bring our best performance to court and see what it brings us. We have played these pairs many times, so it all boils down to the mental game. The pair who are mentally toughest will prevail.”