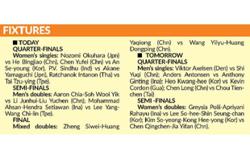 PETALING JAYA: China made a clean sweep of all the badminton gold medals at the 2012 London Olympic Games and now, Japan look like they can pull off the same feat.

Japan will have the biggest badminton team in their home Olympics with the qualification of 13 players in the Games from July 23-Aug 8. They don’t only have the numbers but they have the quality and depth in the team too.

Except for the mixed doubles, they have two representatives in all other events.

Yuta will be the outstanding man, who will play in two events – men’s doubles and mixed doubles.

Japan’s success in the Olympics only came at a later part when Mizuki Fujii-Reika Kakiiwa became the country’s first gold medallists by triumphing in the women’s doubles at the 2012 London Games.

At the 2016 Rio Games, they did better when Nozomi and Misaki Matsutomo-Ayaka Takahashi made it two for Japan in the women’s singles and doubles.

In the absence of Carolina Marin of Spain, who has withdrawn due to injury, the path is even clearer for Nozomi to go after her second gold.

This year, expect the men to make a strong assault too.

Kento, who lost to Malaysia’s Lee Zii Jia in the quarter-finals of the All-England in March this year, is seen as the hot favourite at home while Hiroyuki-Yuta have been on fire, winning the All-England twice in 2020 and 2021.

They may have only one pair in Yuta-Arisa in the mixed doubles but the duo are lethal.

Currently, Japan are the only team with equal strength in all the events - making it possible to win all five.

Head coach Park Joo-bong has been hard at work with his team of coaches and players despite all the challenges in their country, where Covid-19 cases are still rising but based on their work rate, results and sheer determination, a high five at home is possible. 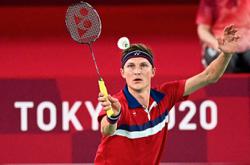