Marin may skip Malaysian Open for her home tourney 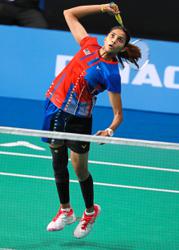 PETALING JAYA: Local badminton fans may not get to see reigning Olympic champion Carolina Marin in action yet again when the Malaysian Open returns next month.

The 27-year-old Spaniard missed the last edition in 2019 through a knee injury and she could possibly skip the May 25-30 event despite signing up for it.

Marin has also committed to the fourth-tier Spain Masters from May 18-23 just a week before the Malaysian Open.

It’s not possible for Marin to play in both meets as competitors are required to arrive in Kuala Lumpur latest by May 17 due to Covid-19 protocols.

Which will she choose – her home tournament or the Malaysian Open?

The world No. 4 may feel obliged to stay back as the tournament is taking place at the venue renamed after her – the Carolina Marin Sports Palace (previously known as Huelva Sports Palace) – where it will also serve as a test run for the World Championships from Nov 29-Dec 5.

The Spain Masters is being held in her hometown Huelva for the first time as the previous editions were held in Barcelona.

The stage was all set for Marin to be crowned the first home champion in her debut last year but Thailand’s Pornpawee Chochuwong ruined it for her after chalking up a thrilling 11-21,21-16,21-18 win in the final.

Marin withdrew in the eleventh hour from the 2018 inaugural edition because she was sick and did not play in 2019 due to an injury.

But the fact that the three-time world champion did not withdraw her name from the Spain Masters as of last week suggests that she could skip the Malaysian Open that has been a regular fixture for her since her debut in 2012.

After all, the Malaysian Open has no significance for Marin as she had already won the title once in 2015. She also came in as the runner-up in 2017.

The only reason that could convince her to play in Kuala Lumpur is perhaps the opportunity to play in a full-strength field contest featuring all the world’s top 10 players after a long time.

But she can still make up for it at the Singapore Open (June 1-6) where the same group of players are expected to play.

Even if Marin does skip the Malaysian Open to play in the lower-tier Spain Masters, it’s not something unusual.

In 2017, world No. 1 Tai Tzu-ying of Taiwan made an even more bizarre move by opting to skip the World Championships in Glasgow, Scotland, so that she could compete in the World University Games (Universiade) in Taipei City.