World No. 22 Pearly-Thinaah showed that their stunning Swiss Open victory two weeks ago was no fluke by powering past the more illustrious world No. 8 pair 21-17,23-21 at the Arena Birmingham on Wednesday (March 17).

They will take on Jessica Hopton-Jenny More of England next for a place in the quarter-finals.

“It was quite a surprise and an unexpected win for us. We have strong belief in each other and we communicated well on court and played the rotation well," said Pearly, who turned 21 on Sunday (March 14).

"We are excited to be here as this is our first All England. To win our first match was a big thing for us.

Pearly-Thinaah are Malaysia's only representatives in the women's doubles competition this week as their world No. 10 seniors Chow Mei Kuan-Lee Meng Yean had opted to skip it.

Up next for Zii Jia is Denmark's veteran Hans-Kristian Vittinghus, whom he had beaten once during the Thomas Cup in Bangkok three years ago.

Liew Daren failed to make it a double joy after going down 10-21,10-21 to H. S. Prannoy to mark his first defeat in four meetings against the Indian opponent.

V Shem-Wee Kiong, the semi-finalists in 2016, defeated Mark Lamsfuss-Marvin Seidel 21-11,21-18 to exact sweet revenge on their German rivals following their second-round loss at the Swiss Open.

The world No. 11 will face Denmark's Mathias Christiansen-Niclas Nohr next, the pair who eliminated Hang Yee-Eng Cheong 21-16,21-19.

Yew Sin-Ee Yi warmed up well ahead of their crunch match against defending champions Hiroyuki Endo-Yuta Watanabe of Japan with a convincing 21-13,21-12 win over India's M. R. Arjun-Dhruv Kapila.

Neither Soniia Cheah nor S. Kisona managed to pull off a surprise in the women's singles challenge.

Soniia went down to reigning world champions P. V. Sindhu of India 11-21,17-21 while Kisona was outclassed 6-21,7-21 by Thailand's Busanan Ongbamrungphan. 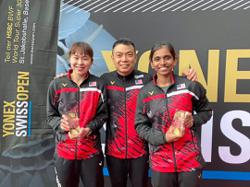