PETALING JAYA: It’s been four years since Malaysia tasted success at the All-England when Lee Chong Wei bagged his fourth crown in 2017.

In fact, the now-retired Chong Wei is the only shuttler to have won in the world’s oldest badminton tournament since 2010 which speaks volumes about the sorry state of Malaysian badminton.

In that decade, even non badminton-playing countries such as Spain and Russia have produced champions through Carolina Marin (2015) and Vladimir Ivanov-Ivan Sozonov (2016).

And the question is – will the drought continue?

It looks almost certain unless someone in the 22-member contingent can rise to the occasion and spring a surprise when the 111th edition kicks off today at the Arena Birmingham.

Our best bet will be in mixed doubles with five pairs in the fray and three of them seeded.

World No. 7 Chan Peng Soon-Goh Liu Ying, No. 11 Goh Soon Huat-Shevon Lai Jemie and No. 12 Tan Kian Meng-Lai Pei Jing have been seeded third, fifth and sixth respectively thanks to the non-participation of four of the world’s top five pairs from China, Thailand and South Korea.

However, it’s worth noting that the seedings are merely just numbers.

At the Swiss Open two weeks ago, none of our three pairs managed to justify their top-five billings, with Kian Meng-Pei Jing the best performers by reaching the semi-finals.

But these players especially the seniors know very well that this could be their best chance to etch their names as the first-ever mixed doubles champions from Malaysia.

Peng Soon-Liu Ying would want to do better having previously finished as runners-up in 2017. The same goes for Soon Huat-Shevon, who made it to the semi-finals two years ago.

The other four events are unlikely to deliver.

In men’s doubles, Rio Olympics silver medallists Goh V Shem-Tan Wee Kiong will lead the challenge in the absence of world No. 9 Aaron Chia-Soh Wooi Yik who opted out.

It’s too much to ask of them to regain the title last won by Koo Kien Keat-Tan Boon Heong in 2007.

The return of the Indonesians after a long hiatus including world No. 1 Kevin Sanjaya-Marcus Fernaldi as well as Japan’s No. 5 and defending champions Hiroyuki Endo-Yuta Watanabe and Takeshi Kamura-Keigo Sonoda will make their task a lot harder.

The 22-year-old has been sluggish since the start of the year and the “Grand Slam of badminton” provides him with the best platform to regain his confidence and the trust from fans.

It was at last year’s All-England that saw Zii Jia played his career’s best performance when as a debutant, he made it all the way to the semi-finals before losing a close battle against eventual winner Viktor Axelsen of Denmark.

But he has tough hurdles ahead and if he makes it to the last eight, Japan’s world No. 1 Kento Momota will be waiting.

However, the draw has not been too kind for the world 22nd ranked pair as they open their campaign against Thailand’s No. 8 Rawinda Prajongjai-Jongkolphan Kititharakul. 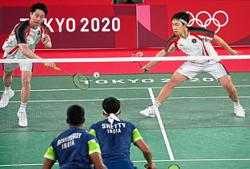