Reason to smile: Shevon Lai Jemie (right) and Goh Soon Huat got off to a winning start at the Swiss Open

PETALING JAYA: Malaysia’s mixed doubles pair Goh Soon Huat-Shevon Lai Jemie chalked up their maiden win as independents in the Swiss Open and in the process did their Tokyo Olympics qualification bid a world of good.

The world No. 10 downed Eloi Adam-Margot Lambert of France 21-18,21-14 but it was the defeat of Indonesia’s Hafiz Faizal-Gloria Widjaja in Basel on Tuesday that gave them a tremendous boost for a ticket to the Olympics.

Soon Huat-Shevon will now have extra motivation to secure the title this week and pile the pressure on Hafiz-Gloria who went down 18-21,10-21 to India’s Satwiksairaj Rankireddy-Ashwini Ponnapa.

With the Race to Tokyo resuming at the Swiss Open this week, Soon Huat-Shevon must break into the top eight to qualify alongside compatriots Chan Peng Soon-Goh Liu Ying, who are No. 7 in the standings.

Hafiz-Gloria’s early exit meant they are unable to add points to lift them from the No. 8 position they currently occupy. Each country is allowed two qualifiers for the Olympics if they are ranked in the top eight.

Soon Huat-Shevon can significantly reduce the deficit on the top eight by reaching the semi-finals or better this week.

The other competitors who are ahead of them are England’s Marcus Ellis-Lauren Smith (No. 10) and Hong Kong’s Tang Chun Man-Tse Ying Suet (No. 9).

Ellis-Smith have also made it to the second round while the Hong Kong pair are not in Basel.

However, Shevon has refused to get carried away by their rivals’ misfortune.

“Even though they (Hafiz-Gloria) lost early, it won’t have much of an impact unless we do well. It’s for us to turn this situation to our favour, ” said Shevon.

“Still, we do have some catching up to do in the coming tournaments. Not only on Hafiz-Gloria as there are also the England and Hong Kong pairs who are ahead of us.

“For now, all we need to do is to try and gain as many points as possible and see how it goes.

“That said, we’re taking it one tournament at a time. For this week, we definitely want to go for the title. That’s the ultimate goal of ours.”

Peng Soon-Liu Ying and another newly-turned professional pair Tan Kian Meng-Lai Pei Jing have also progressed to the second round.

Malaysia’s world No. 29 Hoo Pang Ron-Cheah Yee See and No. 60 Chen Tang Jie-Peck Yen Wei failed to impress as both went down to French opponents.

Pang Ron-Yee See failed to replicate their brilliant semi-final run at the Thailand Open II last month as they were beaten 19-21,17-21 by Ronan Labar-Anne Tran while Tang Jie-Yen Wei were outplayed 12-21,17-21 by world No. 11 Thom Gicquel-Delphine Delrue.

Tang Jie said they only have themselves to blame for the defeat.

“Our opponents may be higher ranked, but the main reason for our defeat was because we conceded too many points through our own mistakes, ” lamented Tang Jie.

“We were able to match them 12-12 in both games until we squandered point after point cheaply after that.” 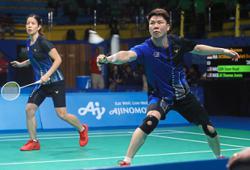