PETALING JAYA: Second seed Lee Zii Jia made it safely through the opening round of the Swiss Open in Basel on Wednesday (March 3), defeating Russia's Sergey Sirant 21-12,21-14.

The world No. 11 took 37 minutes to get past the 2017 Russian Open champion and will face Denmark's Victor Svendsen for a place in the quarter-finals later Thursday (March 4).

Zii Jia should overcome world No. 65 comfortably to set up a potential last eight clash with 2019 World Championships bronze medallist B. Sai Praneeth of India.

In the men's doubles, top seeds Aaron Chia-Soh Wooi Yik were among four Malaysian pairs checking into the last 16.

Malaysia's challenge in the women's singles ended prematurely with the elimination of Soniia Cheah. 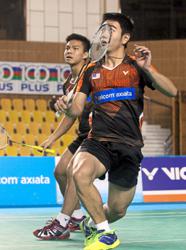