PETALING JAYA: Top national shuttler Lee Zii Jia has paid the price for his lacklustre performance in the three back-to-back season finales of the World Tour in Bangkok last month.

The 22-year-old is no longer a world top 10 player after slipping to No. 11 in the latest world ranking lists that have been reopened after 11 months yesterday.

Zii Jia cracked the top 10 for the first time following a brilliant semi-final outing in his All-England debut in March last year.

He joined Lee Chong Wei and Liew Daren as the only three Malaysian men’s singles players to achieve the feat in the past decade.

Zii Jia was able to keep his new-found status since as the world rankings were frozen due to an unforeseen period of circuit suspension because of the Covid-19 pandemic.

With plenty of ranking points at stake last month, Zii Jia could have climbed higher but squandered the great opportunity after managing only one quarter-final result from the three meets.

Mei Kuan-Meng Yean, the semi-finalists of the Thailand Open 1 and World Tour Finals, jumped four spots to No. 10 to mark their career-best ranking.

Their previous best position was No. 12 in November 2019.

Their best-ever position was No. 6 back in September 2018.

It must be a consolation of sorts for them following their humbling exit from the semi-finals of the Tour Finals on Sunday.

In the men’s doubles, Aaron Chia-Soh Wooi Yik’s runner-up finish at the Thailand Open II did little to boost their position as they remained No. 9 in the standings.

But they better mind their gap as their national No. 1 status could well be under threat with professional pairs Goh V Shem-Tan Wee Kiong and Ong Yew Sin-Teo Ee Yi making big strides too.

Former world No. 1 V Shem-Wee Kiong gained three spots to No. 11 thanks to their runner-up finish at the Thailand Open 1, while Yew Sin-Ee Yi shot up to No. 13 from No. 15.

Young pairs Pearly Tan-M. Thinaah and Hoo Pang Ron-Cheah Yee See have also been well rewarded for their superb showings in Bangkok by breaking into the top 30 of the women’s doubles and mixed doubles rankings respectively.

Pearly-Thinaah, who made the quarter-finals in both the Opens, are now the world No. 30, an improvement of nine places from where they were, while Pang Ron-Yee See, the surprise semi-finalists of the second Open, reach their career-best No. 28 after surging from No. 35.

Now that they are in the top 30, these two pairs can expect to feature regularly in top tier World Tour events for months to come. 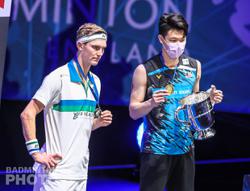 Take heart – virus-hit shuttlers should be back in the fray soon
You can’t blame Soniia
Academy Badminton Malaysia forced to shut down for the next few days
Covid-19: Five shuttlers test positive, Academy Badminton Malaysia shuts down
Chef de mission Chong Wei keeps athletes on guard with sound advice
Lee receives first dose of Covid vaccine
Zii Jia models himself after Axelsen for breakthrough win
To be or not to be in India – Goh and Tan ponder
One loss is enough
Take it easy, Zii Jia