Determined: Chan Peng Soon (right) and Goh Liu Ying will be hoping to make amends at the Toyota Thailand Open next week.

Yesterday, Liu Ying and Chan Peng Soon went down fighting 18-21,17-21 to top seeds Dechapol Puavaranukroh-Sapsiree Taerattanachai of Thailand in the quarter-finals of the Yonex Thailand Open at the Impact Arena in Bangkok.

It was only their second defeat in six matches against the Thais.

Liu Ying suffered the pull in the second game but kept her cool to play on.

Despite the defeat, Peng Soon gave her partner a pat on the shoulder for her fighting spirit.

“We kept to their pace and did not allow them to take huge leads but we made some simple mistakes, ” said Peng Soon.

“We’ve not played for some time and it was satisfying to give our opponents a good fight.

“We were fit and our game was okay.

“The shuttle is slow and players like Liu Ying and I found it hard to cope. Even though Liu Ying had difficulties in the second game when she pulled her back, we still kept fighting.”

Liu Ying hoped to get back on her feet next week at the Toyota Thailand Open.

“It’s unfortunate that I got a slight injury. I tried to push despite my lower back pain but it was tough, ” she said.

“I hope to recover quickly and be ready for next week, ” added Liu Ying.

The other semi-finals will be between Thom Gicquel-Delphine Delrue of France and Praveen Jordan-Melati Daeva of Indonesia. 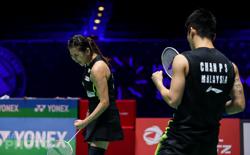 Lee receives first dose of Covid vaccine
Zii Jia models himself after Axelsen for breakthrough win
To be or not to be in India – Goh and Tan ponder
One loss is enough
Take it easy, Zii Jia
Tien Minh set to join Chong Wei and Lin Dan in four-time Olympian club
Indie pairs sign major deal ahead of Tokyo qualifiers
Duo head to Covid-19 danger zone to realise Tokyo dream
Pang Ron-Yee See eye qualification for world meet
Indra trusts Jin Wei will tough it out in bid to regain form