PETALING JAYA: Doubles shuttler Goh Sze Fei is relishing the prospect of taking on former world champions Ko Sung-hyun-Shin Baek-cheol of South Korea in the first round of the Thailand Open, which begins next Tuesday.

The 23-year-old is thrilled about the showdown as this will be the first time that he and his partner Nur Izzuddin Rumsani will get the chance to play against them.

Sung-hyun-Baek-cheol, the world and Asian champions in 2014, have made quite an impression after returning from retirement in August 2018 – two years after the Rio Olympics.

They have picked up five titles and are now the world No. 25.

“We have got ourselves a tough opener, but at the same time we feel excited as well, ” said Sze Fei.

“This will be our first clash against a pair who had won the World Championships.

“We played Li Junhui-Liu Yuchen (of China) once in 2017, but that was a year before they became the world champions.

“I still remember vividly the final between Sung-hyun-Baek-cheol against (Lee) Yong-dae-(Yoo) Yeon-seong which went down the wire. The Koreans boast one of their best men’s doubles of their generation at that time. Now I’ve got the chance to face them.

“Although they are veterans now, Sung-hyun-Baek-cheol are still a force to be reckoned with. They have won a few titles already after making a comeback.

“Also, they are quite pacey. Izzudin and I must come up with a good strategy to overcome them.”

Izzuddin, meanwhile, is hoping that the absence of world No. 1 Kevin Sanjaya-Marcus Fernaldi of Indonesia would pave the way for an all-Malaysian quarter-finals.

Also bunched in the same top quarter of the draw are Aaron Chia-Soh Wooi Yik and Goh V Shem-Tan Wee Kiong, who will face off in the first round.

“Our focus is to beat the experienced Koreans first. If we can do that, then we should have a great chance of making the quarter-finals, ” said Izzuddin.

“We have three pairs in the same quarter, it would be great if our compatriots can make it to the last eight too, assuring Malaysia of being represented in the semi-finals.

“Regardless, we’re very motivated to play in this tournament.

“We want to try go as far as possible and rake in valuable points to boost our ranking, ” added Izzuddin, who is currently ranked 28th in the world with Sze Fei. 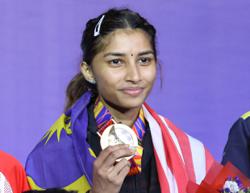