We’ve got you covered!

It’s a wrap: Liew Daren and the other independent shuttlers prior to their departure to Bangkok.

PETALING JAYA: It was a trip like no other but doubles shuttler Pearly Tan reckons it is worth all the hassle if that’s what it takes for her to compete on the international stage again.

The 20-year-old was among hundreds of shuttlers, including 24 compatriots, who landed in Bangkok under strict protocols yesterday – one week ahead of the three back-to-back World Tour showdowns that mark the restart of the flagship circuit.

The stringent entry requirements imposed by the Badminton World Federation (BWF) have proven to be necessary as world No. 1 doubles shuttler Kevin Sanjaya of Indonesia became the third notable individual to test positive for Covid-19 a day after two-time world champion Kento Momota of Japan and the Badminton Association of Malaysia (BAM) coaching director Wong Choong Hann fell victim to the virus.

The Indonesian Badminton Association (PBSI) confirmed that Kevin did not travel with the team after he tested positive on Dec 31. Kevin and partner Marcus Fernaldi were the top seeds in the doubles.

Pearly admitted it was a challenging experience to travel and participate in a tournament with a myriad of restrictions.

“We had our face shield and mask on, and also needed to be cautious during the entire journey. I’ve never experienced anything like this, ” said Pearly.

“Once the plane landed, it took us around two-and-half-hours to be cleared at the airport. We had to produce a lot of documents ranging from Covid-19 test result, certificate of entry to travel insurance.

“But I guess the best part is having the cleanest pair of hands, ever. There were airport staff stationed everywhere with sanitiser while we were heading to the exit. 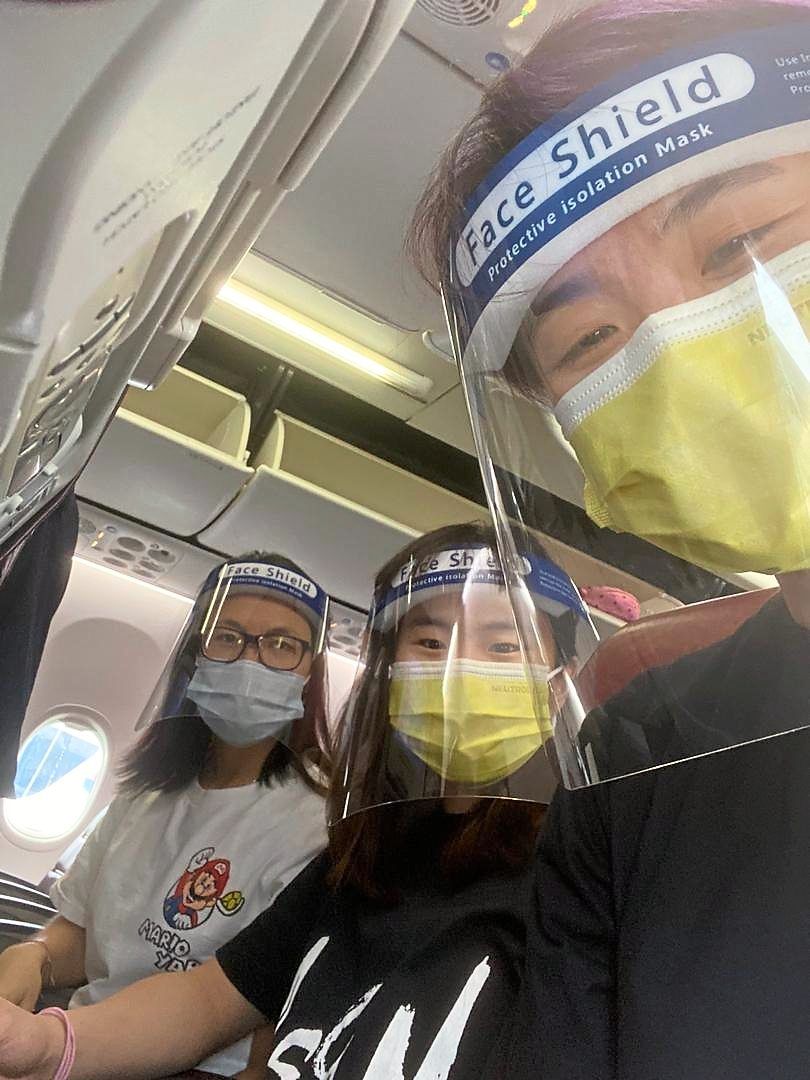 No hassle: Pearly Tan (centre), Yap Cheng Wen (left) and Vivian Hoo in good spirits on board the flight.

“We’re required to sanitise our hands within a short walking distance. I think I could have probably washed my hands eight times at the airport itself and at the hotel, it’s the same process all over again.”

All the shuttlers and entourage were tested again when they reached the hotel.

They are required to stay in the room throughout their 14-day quarantine period with the exception of court practice or matches.

Despite all the trouble, Pearly said she and partner M. Thinaah remained in high spirits ahead of their debut in the top-tier World Tour tournament.

“It’s worth it. I’m so looking forward to competing again in a big tournament, we’re looking to make our presence felt against the world’s best, ” said Pearly.

Meanwhile, independent shuttler Liew Daren too has little to complain about the strict protocols.

“There are personnels escorting us all the time. I guess it’s good, it makes us feel safe, ” said Daren.

Daren, together with other independent teammates, are taking no chances as they travelled with personal protective equipment (PPE) on.

“It’s better to be safe than sorry. We’re doing whatever we can to protect ourselves. The rest is beyond our control, ” he added.