Determination: Shevon Lai Jemie (left) and Goh Soon Huat are still hell-bent on winning a ticket to the Tokyo Olympics.

PETALING JAYA: National mixed doubles ace Shevon Lai Jemie is looking to make the most of next month’s Asian legs of the World Tour to get her and partner Goh Soon Huat ready for the resumption of the “do-or-die” Tokyo Olympics qualifying battle in March.

The 27-year-old is glad she can make the two Thailand Opens and possibly also the World Tour Finals in Bangkok – the three tournaments of the highest level – as a test run to gauge where they stand after a 10-month hiatus.

Like many top shuttlers around the world, Shevon and Soon Huat too have yet to see any action after competing at the All-England in mid-March due to the Covid-19 outbreak.

The currently halted qualifying race will not restart until March.

The Swiss Open from March 2-7 will be the first of the six major uncompleted qualifiers that include German Open (March 9-14), Malaysian Open (March 31-April 4), Singapore Open (April 13-18), Asian Badminton Championships (April 27-May 2) and Indian Open (May 11-16).

“The Thai events will be extremely important for us as we want to use them to get ourselves back on track after a long absence from competition, ” said Shevon.

“We’re fortunate that we’re not made to play in the Olympic qualifiers right away as soon as the season resumes. It makes a lot of difference to have some tournaments in hand to gradually build on the progress and hopefully peak at the right time.

“And the fact that we get to play in top-tier meets where all top-ranked players will be back is great. If we do well, it’s going to do our confidence a whole world of good.”

Shevon and Soon Huat still have a shot at qualifying for next year’s Olympics.

In the suspended Road to Tokyo ranking, they are 11th on the list, just four rungs below independent shuttlers Chan Peng Soon-Goh Liu Ying.

A country can have a maximum of two pairs if they are ranked in the top eight when the qualifying period ends.

“The very few qualifying events will be do or die for us. We simply can’t afford any slip-ups if we want to qualify, ” said Shevon.

“It looks tough, but we will not give up until we reach the finish line.”

It will then be followed by the World Tour Finals at the same venue from Jan 27-31.

Shevon and Soon Huat remain on course to make the top-eight cut for the season finale as they are currently placed 10th in the points standings. 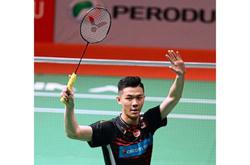