Badminton Association of Malaysia (BAM) development committee chairman Datuk Ng Chin Chai said there were openings in the junior and grassroots department if the trio were keen to continue with their coaching duties.

The BAM did not extend the three coaches’ contracts which expire at the end of this month, leaving them in a lurch during the difficult times when coaching jobs are scarce.

Former national No. 1 men’s singles shuttler Ong Ewe Hock took the national body to task and said instead of dropping them like a hot potato, they could have utilised the services of the coaches in the junior squad, states or schools.

Chin Chai said Ewe Hock’s proposal would work if the national coaches were willing to strengthen the development programme. In fact, Chin Chai said they were looking for two coaches to beef up the national junior team under the charge of Datuk Misbun Sidek.

“We’re looking for coaches to strengthen our junior department. I’ve had a discussion with Misbun and he needs two more coaches for the Under-15 department, ” said Chin Chai.

“What Ewe Hock said is food for thought but there are several factors to consider.

“It’s important to know whether the national coaches are willing to come down to train the juniors. Secondly, the remuneration package. Usually, the development sector does not offer as much as in the national team.

“If the coaches are willing, then I’m open to the idea. It can be discussed.”

Chin Chai said the coaches could also be used in the states.

“BAM are having the council meeting next month, I’ll bring this up. If there are states keen to hire Rosman, Eei Hui or Pei Tty to add depth in their set-up, then I will get in touch with these coaches, ” said Chin Chai.

Every year, each state is given RM300,000 for development work by the BAM.

“All our states have a head coach and an assistant, and most of them are former players. In Negri Sembilan for example, the head is former doubles player Razif Rahman and he is assisted by Chin Shi Weng.

In Perak, former doubles player Mohd Fairuzizuan (Mohd Tazari) is there, ” he said.

On Misbun’s programme at the Academy Badminton Malaysia (ABM), Chin Chai said: “We’re happy with Misbun’s presence and the progress of our juniors, there are a few talented ones in the squad.” 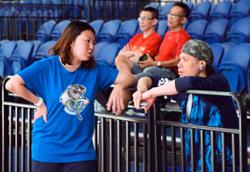