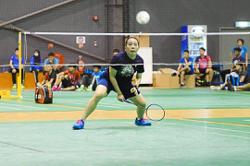 KUALA LUMPUR: A healthy-again Goh Jin Wei (pic) will have to bide her time before getting a chance to stamp her mark on the international stage again.

The 20-year-old, who said she’s fully recovered from her stomach ailment, wanted to make a strong comeback at the Uber Cup Finals.

Unfortunately, it wasn’t meant to be for the two-time world junior champion as the Finals, initially scheduled for Oct 3-11 in Aarhus, Denmark, had been postponed to next year.

“I was a little disappointed (with the postponement), but this is all due to the ongoing pandemic and we just can’t help it, ” said Jin Wei.

The proposed two Asian legs of the World Tour in Thailand could be Jin Wei’s only hope to salvage some action before the year ends, but she’s unlikely to make the cut.

Due to inactivity for a long period last year, Jin Wei has slipped from a career-best No. 24 to No. 138 in the world rankings.

“I don’t think I’ll be able to play in the Asian meets even if they are held. My ranking is too low and I don’t think I can qualify, ” lamented Jin Wei, who’s also the Youth Olympic Games gold medallist in Buenos Aires 2018.

“The least I can hope for now is for the Badminton Association of Malaysia to hold more internal tournaments.

“Otherwise, I’ll just continue to train hard and not think about things beyond my control.”

Jin Wei did impress in her first competitive match in seven months on Wednesday when she whipped Eoon Qi Xuan 21-12,21-9 to help Team A pip Team B 3-2 in the women’s event of the President’s Cup.

Jin Wei, who last played at the Asia Team Championships, looked comfortable and confident as she won in just 36 minutes.

Despite the clinical show, Jin Wei said it was not up to expectations.

“I’m happy to be back and really enjoyed the competitive game after a long time, ” said Jin Wei, who did not play in the BAM Invitational Championships last month because she was deemed “unfit” at that time.

“But it was nowhere near my best. I would rate my performance at 60%. Considering the hard work I have put in to beef up my game in the last seven months, I don’t feel it’s good enough.”

Jin Wei had been making decent progress since moving up to the senior ranks in 2017 before she suffered a stomach ailment that required her to undergo a colectomy procedure last year. It sidelined her for almost seven months before she returned in January.

Prior to that, Jin Wei did well in the first three months of last year by making the semi-finals of the Malay-sian Masters and the German Open.