Out of the picture: Independent pair Tan Wee Kiong and Goh V Shem will not get to train under Chew Choon Eng (middle).

The two pairs, who are now training under former international Chew Choon Eng, have been invited by the Badminton Association of Malaysia (BAM) to prepare for the Thomas Cup Finals in Aarhus, Denmark, from Oct 3-11.

Choon Eng, however, will not be part of the Thomas Cup set-up although his players will train on a full-time basis at the Academy Badminton Malaysia (ABM).

“No, it will be just the players coming in,” said Choong Hann when asked if Choon Eng will tag along with his charges.

“They will train with the rest of the team under our coaches, based on the training programme we prepared.

“We are going to meet them soon to discuss whether they would need our assistance on their strength and conditioning. If they are already comfortable with the ongoing arrangements with personal coaches, we are fine with that.

“But in terms of court training intensity, we can help them raise their level.

“I don’t think there’s going to be any problem having them fit in. After all, they all came through from the same system.

“In fact, it will only do them good to combine the best of two sets of programmes.”

Like the doubles shuttlers, Daren and Joo Ven can consider themselves in the running for the squad selection, expected to be in September.

After the selection, only those who make the team will continue to train with the national team until the Finals.

Peng Soon-Liu Ying, who come under the Road to Tokyo (RTT) programme, will get to spar with their former national teammates such as Goh Soon Huat-Shevon Lai Jemie and Tan Kian Meng-Lai Pei Jing twice a week.

They will get to train full-time with the national team only after they confirm their places for the Tokyo Games.

Choong Hann confirmed that Flandi’s working permit has been approved and is expected to arrive in Malaysia tomorrow.

However, the former Indonesian doubles ace will not report for duty until the end of the month as he has to undergo self-quarantine for 14 days upon arrival. 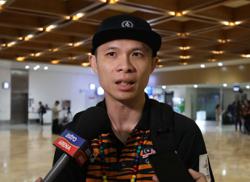