The Badminton World Federation have extended the qualifying period from January to April next year after it was suspended since March this year due to the Covid-19 pandemic.

They have decided that all the Olympic qualifying tournaments that were affected during the last six weeks from March to the qualifying deadline on April 30 this year, will return as qualifiers again during the extended time.

As for the tournaments revised and condensed from August to December this year, they will not offer Olympics points.

Peng Soon said it was a fair solution.

“Liu Ying and I get to keep the qualifying points that we’ve earned since May to March. And the extension means, we will get more time to prepare for the Tokyo Olympics next year (July 23-Aug 8),” said the independent shuttler.

“All the tournaments until the end of this year do not offer Olympics points, so, we don’t have to rush into playing back-to-back tournaments and risk getting injured.

“Most of us are lacking in training. We will play smart and compete in only the major tournaments until end of this year. Next year, we will go all out to confirm our tickets for the Games.”

The 2016 Rio Olympics silver medallists are in the seventh position in the Road to Tokyo ranking list. The other Malaysians in the running are Goh Soon Huat-Shevon Lai Jemie (11) and Tan Kian Meng-Lai Pei Jing (13).

A country can have a maximum of two pairs if both are in the top eight standing when the extended qualifying period ends.

The Road to Tokyo ranking will be activated when the Olympic qualifiers resume next year.

The world body have also made an exception to China and Hong Kong to earn points from the 2021 Asia Team Championships next year.

Both countries were not allowed to enter Manila, which was the host for the team meet in February this year, due to the virus.

Meanwhile, Peng Soon said he had turned down the offer to begin the Road to Tokyo centralised training on June 1 at the Academy Badminton Malaysia (ABM).

“I’ve to stay at home to care for my newborn baby (his wife gave birth to their fourth child early this month).

“I will be quarantined for a month if I join the training. I will join at a later date,” he said.

“My training has been good. Liu Ying and I, together with the other independent players, play tennis as well to keep in shape.

“I’m glad that during this time, Liu Ying and I also secured a new sponsorship,” added Peng Soon, who will be supported by Maxi Stone, a company that imports natural stone products.

Shevon will also miss the training as she is in hospital with dengue fever and will be out for two weeks. 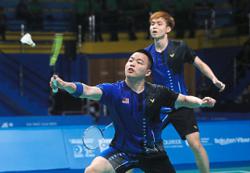