Soon Huat and Shevon go out tamely to Koreans

PETALING JAYA: Last year, they were semi-finalists. This time, they were first-round casualties.

There was was no happy return to Arena Birmingham for national mixed doubles pair of Goh Soon Huat-Shevon Lai Jemie as the world no 11 were no match for South Korea’s world No. 7 Seo Seung-jae-Chae Yu-jung, going down tamely 12-21, 13-21 in just 30 minutes.

Losing the match in such a manner was certainly uncharacteristic for Soon Huat-Shevon as they had beaten the same rivals at the Korean Masters last November.

The early defeat could also cost Soon Huat-Shevon dearly in their bid to qualify for their first Olympic Games in Tokyo.

They are currently ranked 10th in the Race to Tokyo rankings and time is running out for them to finish in the top eight or overtake seventh-placed compatriots Chan Peng Soon-Goh Liu Ying.

It was Soon Huat-Shevon’s second disappointment in as many tournaments after also letting themselves down at the Spain Masters last month.

Then, they were top seeds but were ousted in the quarter-finals.

As for Seung-jae, the win just showed how much the 22-year-old wanted to redeem himself after being allowed to return to the national team three weeks ago.

Seung-jae had been suspended for breaching a double contract ruling after signing for two clubs, but the Badminton Korea Association (BKA) lifted the ban following appeals from Yu-jung and Chol Sol-gyu whom he partners in the men’s doubles.

In other mixed doubles action, Tan Kian Meng-Lai Pei Jing celebrated their return to world top 10 by cruising into the second round for the first time in three attempts at the All-England.

But a daunting task awaits them in the last 16 as they take on fifth seeds Praveen Jordan-Melati Daeva Oktavianti. 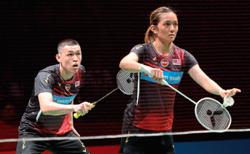 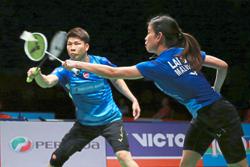