Staying positive: Tan Kian Meng (left) and Lai Pei Jing are hoping to do better this time after failing to get past the first round in the last two editions of the All-England.

PETALING JAYA: Mixed doubles shuttler Tan Kian Meng had readied himself for a possible long wait at the immigration checkpoint due to Covid-19 concerns as he arrived at the Birmingham Airport.

To his surprise, the process was smooth.

Now that the anxiety over the travel is over, Kian Meng is in good spirit ahead of his fourth straight appearance with Lai Pei Jing in the prestigious All-England which kicks off at the Arena Birmingham tomorrow.

“I thought it would be chaotic at the airport, but it was all good. It’s just like any ordinary day,” said Kian Meng, who flew from Paris, where he and other teammates had been based for two weeks after the Spain Masters.

World No. 10 Kian Meng-Pei Jing are hoping to do better this time after failing to get past the first round in the last two editions. Their best was only a second round in their debut in 2017.

Kian Meng-Pei Jing can count themselves lucky this time as they have been handed an easy first hurdle against Canadian world No. 30 Joshua Hulburt-Yu-Josephine Wu.

Barring any upset, they are likely to face world No. 5 Praveen Jordan-Melati Daeva Oktavianti of Indonesia for a place in the quarter-finals.

The other top rivals in the same half are Yilyu-Dongping, teammates Chan Peng Soon-Goh Liu Ying and Japan’s Yuta Watanabe-Arisa Higashino.

“We’ve certainly got ourselves a better draw this time. But there’s no way we’re going to underestimate anyone because everyone who makes it to the All-England are top players,” said Kian Meng.

“After two first-round exits, we can’t afford to lose in the first round again.

“Hopefully we can spring a surprise and go far this year.”

Kian Meng-Pei Jing did well to reach the semi-finals of the Thailand and Indonesian Masters, but they have failed to keep it going in Spain when the second seeds were booted out in the second round by Taiwan’s Lee Jhe-huei-Hsu Ya-ching.

And that has virtually dented their hopes to qualify for the Tokyo Olympics.

Currently ranked 13th in the Race to Tokyo rankings, they face a monumental task to make up nearly 10,000 points deficit to reach the top eight bracket with just a handful of tournaments left before the qualification period ends on April 30.A country can have a maximum of two pairs if they are ranked in top 8 by end of the qualification period. Currently, two pairs ahead of them are Peng Soon-Liu Ying (7th) and Goh Soon Huat-Shevon Lai Jemie (10th).

No Malaysians have won the mixed doubles at the All-England but Peng Soon-Liu Ying did well to the final in 2017 while Soon Huat-Shevon made it to the semi-finals last year in their debut.

Soon Huat and Shevon go out tamely to Koreans 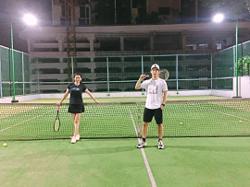