Vivian and Cheng Wen believe in ‘best is yet to come’

In fine fettle: Malaysia women’s doubles pair Vivian Hoo (right) and Yap Cheng Wen believe they can beat a top-10 pair in the near future.

This adage will be their inspiration when they play in the Taiwan Open from Sept 3 to 8.

Despite going out in the third round to Du Yue-Li Yinhui of China 15-21,21-11,8-21 in the World Championships in Basel, Switzerland last week, the duo gave the world No. 7 pair a run for their money.

In Taiwan, Vivian and Cheng Wen, ranked No. 18, should get past the inexperienced scratch pair of Hung Yi-ting-Lin Ying-chun of Taiwan in the first round.

Their second-round opponents are likely to be world No. 43 Chang Ching-hui-Yang Ching-tun, also from Taiwan.

Barring any upset, they will get a rematch against world No. 6 Lee So-hee-Shin Seung-chan from South Korea in the quarter-finals.

Vivian-Cheng Wen will be out to avenge their 21-19,12-21,10-21 loss to the Koreans in the second round of the Indonesian Open last month.

“Our progress has been quite good so far because we have been giving the top 10 pairs a good fight. We only lose out towards the end of the matches, ” said Vivian.

“So the next target for us will be to get a win over a top-10 pair – hopefully soon and in Taiwan.

“Now we also have to focus on collecting qualifying points for the Olympics so every tournament from now onwards is crucial.”

Cheng Wen, making her second appearance in the world meet said: “Now we need to be more consistent and maintain our form in every match and hopefully we can catch up with the top 10 pairs soon.” 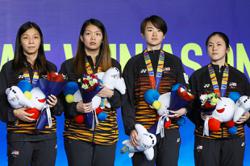