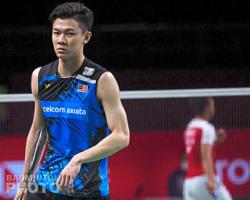 PETALING JAYA: Men’s doubles pair Goh Sze Fei-Nur Izzuddin Rumsani have sent out a clear statement that they should not be taken lightly at the Japan Open.

The world No. 35 Malaysians tore India’s Manu Attri-B. Sumeeth Reddy, the world No. 25, to shreds with an emphatic 21-12, 21-16 win in just 27 minutes – the second shortest match on the tournament’s opening day at Musashino Forest Sports Plaza yesterday.

The victory sets up a well-deserved rematch against world No. 5 Hiroyuki Endo-Yuta Watanabe.

Sze Fei-Izzuddin were beaten 10-21, 12-21 by the Japanese duo in their first meeting at the German Open semi-finals in March.

And Izzuddin is eager to settle to score when the they clash again tomorrow.

“We’re surprised! We just played according to the game plan but certainly didn’t expect to win it easily,” said Izzuddin.

“That was a morale booster surely ahead of our rematch against Endo-Watanabe.

“They definitely will start as the favourites, but we’re looking for nothing but a win.

“From our past encounter with them, we have learned that in order to get the better of them, we need to toughen up our mental.

“They are resilient and hardly make any mistakes.”

Also through to the second round of the men’s doubles were Aaron Chia-Soh Wooi Yik.

The Rio Olympics silver medallists did not only save two game points in the opening game, but also staged a scintillating comeback from 5-15 down to claim the tie.

“I can’t remember if we have ever clawed back to win from such a big gap, but this has to be one of the biggest comebacks,” said Peng Soon.

“We didn’t want to give up and instead kept fighting on. As we picked one point after another, our opponents began to unsettle and we took advantage of that.

“We’re very pleased with how we fought back. It’s always ideal to win in straight games.”

“We’re taking nothing for granted. The fact that they (Gicquel-Delrue) were able to down Tontowi-Winny, we have to tread with more caution,” stressed Peng Soon.

However, it was the end of the road for Vivian Hoo-Yap Cheng Wen who went down fighting 18-21, 21-17, 18-21 to Thailand’s Rawinda Prajongjai-Jongkolphan Kititharakul. 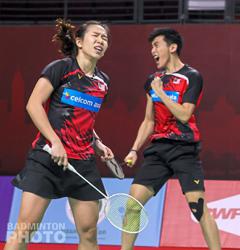