Soon Huat-Shevon, currently the national No. 2 pairing, overcame China’s He Jiting-Du Yue 21-13, 23-21 in a second-round clash in Tokyo yesterday.

Soon Huat-Shevon, ranked sixth in the world, will take on Chinese second seeds Wang Yilyu-Huang Dongping for a place in the semi-finals today.

The Indonesian pair beat Chris Adcock-Gabriellle Adcock 23-21, 21-18 in the second round earlier and will enjoy a psychological edge over Peng Soon-Liu Ying.

Jordan-Oktavia beat Peng Soon-Liu Ying at the India Open in January and the German Open in March this year. 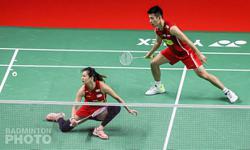