Razif Sidek (left) placed an advertisement in The Star

Yesterday, Razif placed an advertisement in The Star – apologising and retracting an earlier statement he had made to a local Malay newspaper.

In the vernacular newspaper report, which appeared on Nov 9, Razif is alleged to have said that Chong Wei had been taking drugs intentionally – and for a long time.

That led to a visibly upset Chong Wei serving Razif with a lawyer’s letter.

In the advertisement, Razif stated: “I admit and acknowledge that these statements and the allegations and aspersions cast therein against Datuk Lee Chong Wei are false and completely without basis.

“I unreservedly and wholeheartedly apologise to Datuk Lee Chong Wei for any damage, distress and/or embarrassment caused to him by my statements which had impugned his integrity and honesty.

“I undertake and state herein that I will not make any further statements or allegations against Datuk Lee Chong Wei that are baseless and malicious.” 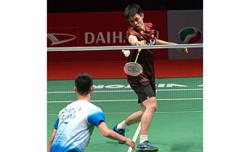