All systems go: Nauraj Singh Randhawa, who was injured, has been cleared to compete in Birmingham. — Reuters

PETALING JAYA: The World Championships blip will no longer be a sore point as high jumper Nauraj Singh Randhawa looks to bounce back at the Commonwealth Games.

Nauraj was shattered after he failed to clear any jumps at 2.17m in Eugene, Oregon, last week due to an old ankle injury which flared up before his competition.

However, according to national athletics coach Manshahar Abdul Jalil, the 30-year-old jumper went for a Magnetic Resonance Imaging (MRI) scan and has been cleared to compete in Birmingham.

The same problem had also affected his performance at the Hanoi SEA Games two months ago. Nauraj had to settle for silver with a jump of 2.18m, which was way below his national record of 2.30m.

Manshahar has faith on Nauraj to step up his game in Birmingham.

“I waited a few days after his competition before calling him as he needed time to regroup. He had prepared well for the meet, so naturally, he was devastated when the injury acted up again,” said Manshahar.

“He felt some pain four days before competition and was not comfortable doing any of his jumps.

“With a troubled ankle, the run-ups and jumps will be affected. I’m sure he will be ready for the Games. He just has to be patient to make his way up again.”

Meanwhile, Manshahar feels that 400m athlete Shereen Samson Vallabouy will be wiser from her experience in the world meet.

The Winona State University student, who is the daughter of former national athletes Samson Vallabouy and Josephine Mary, didn’t have the best of outing when she clocked 53.67 seconds to finish seventh in the heats.

It was a far cry from her personal best of 52.68, which she recorded at the Allendale NCAA Division II Track and Field Championship in May.

“She competed against those who can clock 50 and 51 regularly. So, there is a big gap between her and the top-class runners,” said Manshahar.

“When she runs in the NCAA, she is always setting the pace, but in Oregon, it was a different story.

“She couldn’t cope with the tempo of those in front. Anyway, this is part of her learning process.

“She’ll now know what to do in Birmingham. She has great potential and I’m sure, she will break the national record soon.” 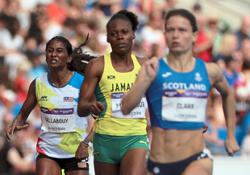