MOMBASA (Reuters) - Kenyan police said on Friday they were still deciding where to arraign the husband of record-smashing long-distance runner Agnes Tirop, found dead at her home this week.

Police arrested Tirop's husband Ibrahim Rotich on Thursday in the coastal city of Mombasa, saying he was trying to flee the country. The Directorate of Criminal Investigations said that he would be arraigned to answer murder charges.

"We are still investigating the matter before a decision to take him to court is made," David Kahinga, a local police official, told journalists in Mombasa. One option is transporting him back to the city of Eldoret, where Tirop was found dead on Wednesday.

"Some issues are still being looked into, but the law requires us to produce a suspect within 24 hours of arrest, and we shall comply," said Kahinga, who is the officer in charge at the Changamwe police station where the suspect is being held.

Less than two weeks ago, on Oct. 3 Tirop finished second in the Giants Geneva 10K race.

She claimed bronze medals at the 2017 and 2019 World Championships in the 10,000 metre race, and won the 2015 World Cross Country Championships. 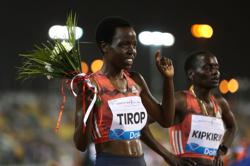 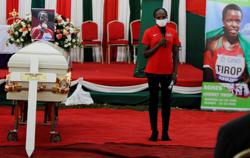