TOKYO (Reuters) -The post-Usain Bolt era in the men's Olympic 100 metres began on Saturday in Tokyo with Dorian Keletela, who is competing as part of the Olympic Refugee team, advancing to the next round with a personal best 10.33 seconds.

Bolt won three straight titles from Beijing in 2008 and his retirement in 2017 has left something of a vacuum in the showpiece athletics event, with no one stepping up to fill the Jamaican's shoes.

On Saturday, amid stifling temperatures that hovered above 30 degrees Celsius, sprinters took the track as they began their attempts to succeed world-record holder Bolt.

Keletela, 22, is one of those athletes.

Originally from the Democratic Republic of the Congo, he moved to Portugal in 2016 following the death of his parents due to conflict in his homeland and ran a personal best 10.33 to advance to the next round later on Saturday.

Others who progressed from the preliminary heats include Zimbabwe's Ngoni Makusha, who got off the block fast to win his heat in 10.32, and Oman's Barakat Al Harthi, who posted 10.27s to win his race.

There were three preliminary heats overall and the first three in each heat qualify to round one, along with the athlete who posts the next fastest time.

The world's top sprinters enter the equation later on Saturday, with the United States, who have won more golds in the event than all other nations combined, determined to take Bolt's mantle and regain their supremacy.

Their last gold medal win in the event came via Justin Gatlin in 2004.

Contenders include Trayvon Bromell, whose 9.77 second run in Florida last month is the fastest of the year and propels him into the top tier of favourites in the race.

His compatriot Ronnie Baker is probably his closest rival for podium positions and finished second to him at the U.S. trials with a time of 9.85.

Canada's Andre De Grasse, who won bronze in the 100m in Rio five years ago, will be looking to go for the title this time around while South African sprinter Akani Simbine, fifth in Brazil and boasting the second fastest time of the year, will also be in the running. 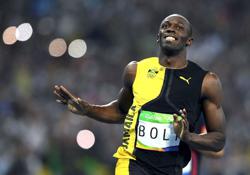 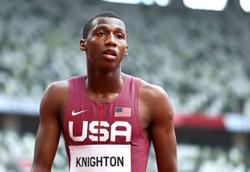