Khairul gives explanation on intention to train under Poad again 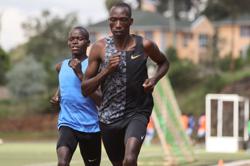 KUALA LUMPUR: National 100m record holder Khairul Hafiz Jantan (pic) has sent a letter of explanation to the Malaysian Athletics Federation (MAF) about his intention to once again be under the tutelage of coach Mohd Poad Md Kassim.

Khairul Hafiz, 22, said he also stated the reasons that influenced his decision to return to training under Poad in the letter, but declined to disclose details.

“A letter to MAF has been sent and I do not want to issue any statement without any confirmation. What I can say is that everything is being done according to the right procedures and I hope the matter can be resolved in the near future, ” he said.

Khairul, popularly known as the ‘Speedy Jantan’, said he had already expected the issue of him moving out of Bukit Jalil would receive a lot of attention, but added that he was not too stressed about it and also hoped the matter would not be blown out of proportion.

“No, I’m not stressed. This was a decision made without being influenced by other parties and one made based on my training experiences with two different coaches, ” the 2017 SEA Games 100m gold medalist said.

Khairul and SEA Games gold medalist Mohd Haiqal Hanafi have made known their intentions to return to their former coach Poad after seven months of training under Miller from August last year.

Hailing from the United States, Miller has more than 30 years of experience in coaching and once helped US athlete LaShawn Merritt grab two gold medals at the 2008 Olympics in Beijing in the 400m and 4x400m events. — Bernama.