Another feather in the cap for Jegathesan Jegathesan is one of the stars from the past featured in the latest episode of the NHK World’s 1964 Tokyo Olympic Games torchbearer series.

Now 77, Jegathesan recalled that when he witnessed the country’s independence declaration in 1957, listened to the new national anthem Negaraku and watched the national flag Jalur Gemilang being raised for the first time, he had a gut feeling that he would stand on the rostrum with the anthem played in honour of his achievement one day.

And he certainly pulled it off.

Dubbed the Flying Doctor, the sprinter then made it happen 11 times by winning in different parts of the world, including twice as Asian Games champion besides featuring in the Olympics three times.

During his heyday in the 1960s, the golden era of Malaysian athletics, Jegathesan was regarded as the fastest man in Asia and was crowned the country’s first National Sportsman of the Year in 1966.

He was also a renowned doctor, researcher and sports administrator after his retirement from track.

The 1964 Olympics in Tokyo was the first ever edition to be held in Asia, while the city’s second hosting of the Games in 2020 was delayed a year to July 23 due to the Covid-19 pandemic. — Bernama 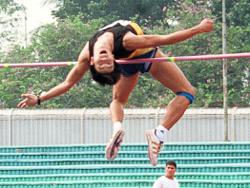