By T. AVINESHWARAN
With the World Cup 2014 days away, we look at the teams and their groups and how they will fare in the coming weeks. Here we look at Group E and F.

NOT as tough as Groups B and D. This group looks set to see Switzerland and 1998 champions France go through with little difficulty. Switzerland and France are European heavyweights and the other two sides - Ecuador and Honduras - will find it tough to get past them. The question is: who will finish top in this group? 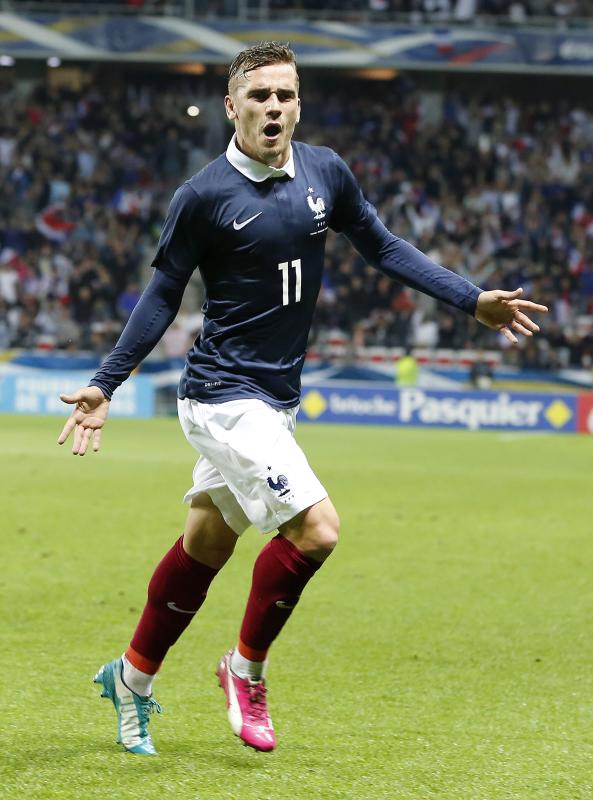 Antoine Griezmann has been impressive in friendlies He will replace Franck Ribery in the starting lineup.


After a tough playoff against Ukraine, they’ve booked their ticket to Brazil! France won the 1998 World Cup and came close to winning in 2006 losing to a resolute Italy in penalties. At World Cup 2010 though, they were disastrous, finishing last in their group. Coach and 1998 World Cup winner Didier Deschamps will no doubt be hoping for a better performance this time around. This is an easy group and it will be a shock if the French are booted out so early! Bayern Munich's sta player Franck Ribery was expected to be the key player for France but a back injury ruled him out of the tournament. When fit, the 31-year-old winger can be a real menace. Most probably Real Sociedad's Antoine Griezmann will replace Ribery. Karim Benzema will benefit from Griezmann’s service so expect him to bang in the goals for Les Bleus. Hugo Lloris looks set to don the captain’s armband and he will definitely be one of the goalkeepers to watch in the tournament. Youngsters like Raphael Varane and Paul Pogba should add much needed youth to the squad. France will however, need to be more consistent if they want to do well in this tournament. It’s an easy group though and they should have an easy passage to the next round. 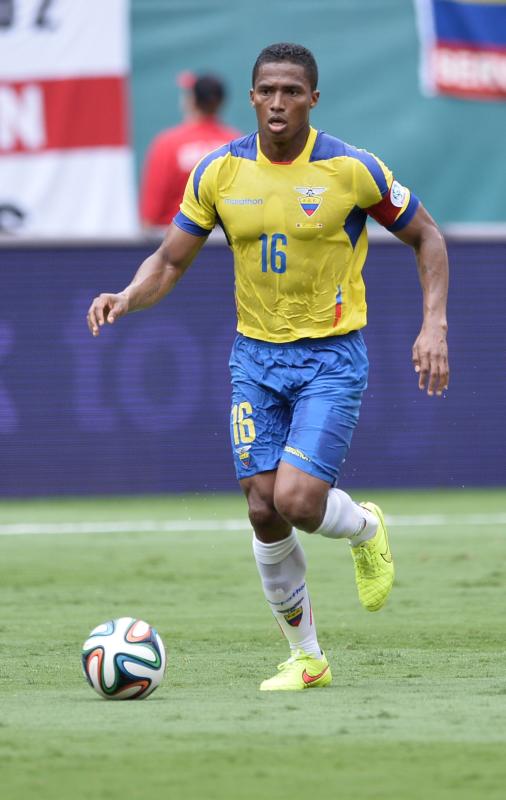 Antonio Valencia will be captain for Ecuador in Brazil.

To be honest, Ecuador don’t stand a chance against France and Switzerland. They’ve got talented players but not the class of the two European nations in this group. Ecuador may boast of Antonio Valencia from Manchester United but he went through a horrendous time with the Red Devils. Dynamo Moscow’s Christian Noboa is the other key player for Ecuador yet he alone can’t lift the team. Felipe Caicedo used to play for Manchester City and Lokomotiv Moscow but has now joined UAE club Al Jazira. I’m sure that’s a step back for a player of his talent! Coach Reinaldo Rueda will be relying on his seasoned players like Valencia, Noboa and Edison Mendez and at the same time look to expose youngsters like Carlos Gruezo and Renato Ibarra. Ecuador has got flair and pace but that alone will get you nowhere against more disciplined sides. Ecuador just don’t have the big game temperament and it’s going to be tough for them in Brazil. 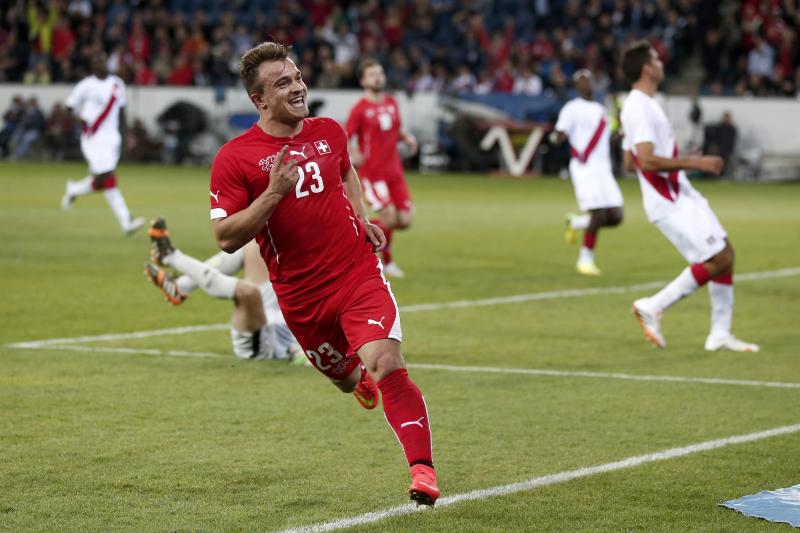 Xherdan Shaqiri will pull the strings in midfield for Switzerland.

I’m expecting this side to qualify to the next round. Ottmar Hitzfeld is an accomplished coach and his composure should rub off on his charges. Switzerland may be a small country but has always had a history of producing great players. After Alexander Frei, Hakan Yakin and Murat Yakin, Switzerland has players like Gokhan Inler, Valentin Stocker and Valon Behrami. Inler for one, is having a great season with Napoli and he will enforced the midfield. Borussia Moenchengladbach’s Granit Xhaka will partner the experienced Inler. Stocker will be the main force in attack and based on his performances with Basel, he looks set to have an impressive World Cup. Xerdan Shaqiri is not a regular with Bayern Munich but he seizes the chance whenever he gets it. Nippy and tricky, the 23-year-old is sure to cause problems for the defenders. Young Fabian Schar looks set to play a key role in defence and will partner with either Philippe Senderos or Johan Djourou. This side is known for their tactical discipline and if everything clicks, teams will find it hard to break them down. History may not be on their side but with a talented squad, expect some impressive performances from the Rossocrociati. 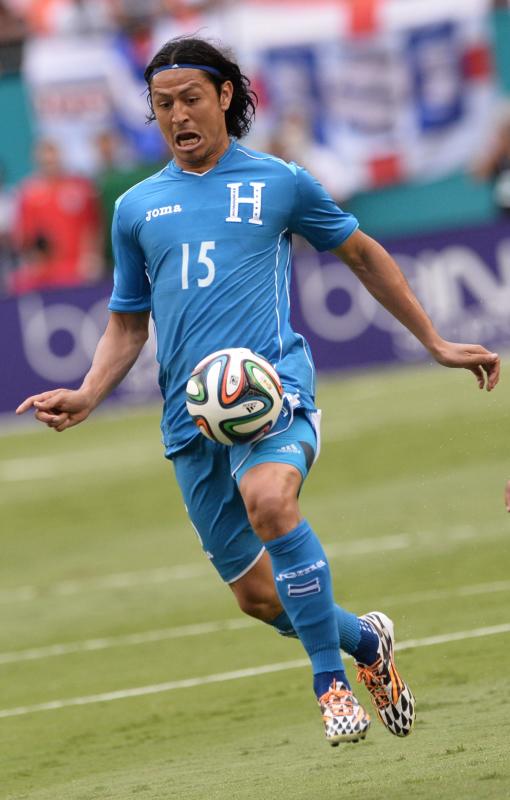 Roger Espinoza is known for his tireless work rate and he will be key for Honduras.

Honduras are surely going home with the wooden spoon. This will be their third World Cup and you can expect them to struggle just as they did before. Most of the players play for North American club sides and the team only have a few players who feature in European and South American leagues. Under coach Luis Fernando Suarez, Honduras impressed in the qualifiers but it’s going to be different on the biggest stage. Celtic’s Emilio Izaguirre and Hull City’s Maynor Figueroa will be the marauding wing-backs for this side while Roger Espinoza will provide the energy in midfield – he is certainly their Duracell Bunny! Jerry Bengtson and Carlos Costly are the forwards to surprise with their goalscoring prowess. Youngsters like Andy Najar and Arnold Peralta will add youth to the squad. Najar plies his trade with Belgian club side Anderlecht and looks set to be a key player for club and country in the near future. Overall, Honduras lack big name players and when compared with the other teams, man for man, the side just don’t have the players capable of achieving something special.

It’s simple – Switzerland and France to qualify from this group! Ecuador and Honduras will find it tough to beat those two sides, much less hold their own against them. This is one of the easiest groups to call. France looks set to finish first while Switzerland should bag the second spot.

THIS is an easy group for South American giants Argentina. La Albiceleste will have the upperhand in this group as they have many world class players in their squad. In the last two World Cups, Argentina were knocked out during the quarter-final stage and this time, they will be hoping to better that. The iconic Lionel Messi will want to win the big one to cement himself as one of the legends of the game. Argentina looks set to finish first but what about the others? 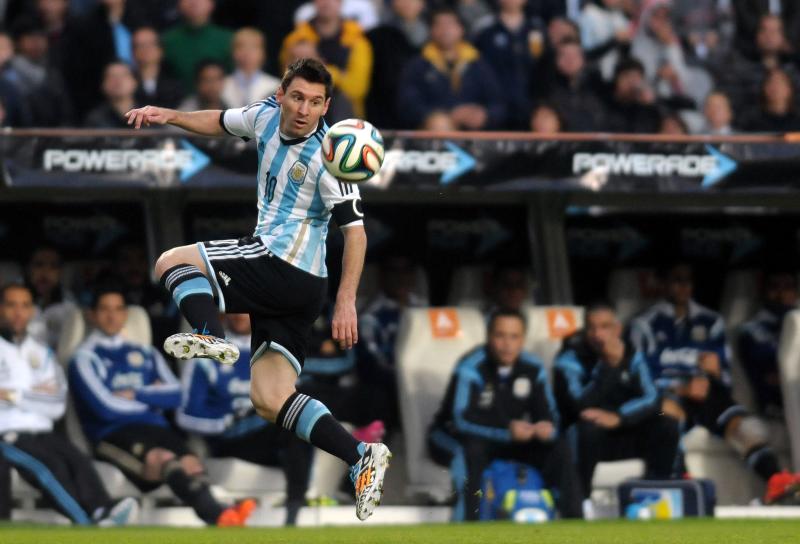 Expect more of these silky touches from Lionel Messi during the World Cup.

Captained by Barcelona forward Lionel Messi, Argentina looks set to win this group easily. Alejandro Sabella will want to win all the games and they have the ammunition to do so. According to Sabella, the team is built around Messi and with him there, there will be goals! Manchester City’s Sergio Aguero and Napoli’s Gonzalo Higuain are two of the most in-form strikers around and Real Madrid’s Angel Di Maria will be the man tasked to provide the goods for the strikers. With all of them there, you’ve got flair, pace and most importantly goals. However, they look weak defensively. They don’t possess the swagger of the Italians and the determination of the English lads. Gone are the days of Roberto Ayala, Javier Zanetti and Juan Pablo Sorin who formed a strong backline in the late 90s. Sabella will rely on defensive midfielder Javier Mascherano to protect the backline. Benfica’s Ezequiel Garay and Napoli’s Federico Fernandez looks set to become the first choice centre-back partnership while Pablo Zabaleta and Marcos Rojo will be the wing-backs. 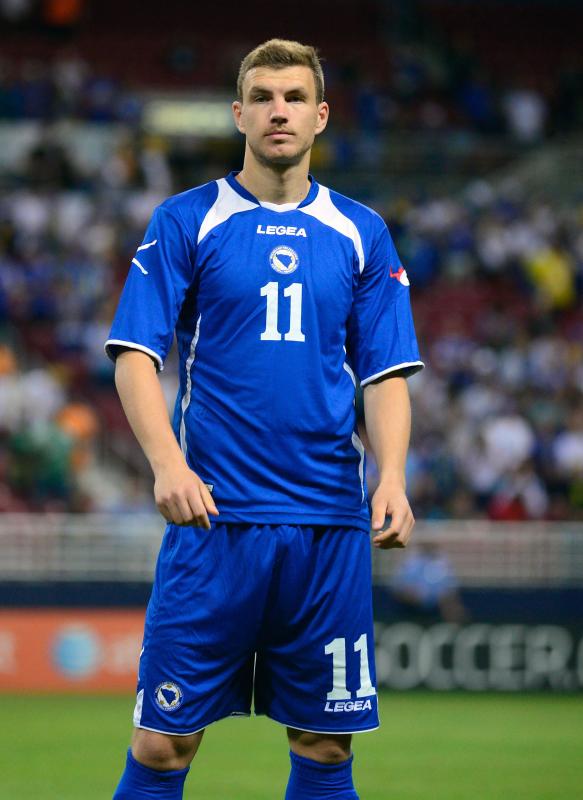 Edin Dzeko will be one of the favourites to win the Golden Boot.

They used to play in Pestabola Merdeka and now they’re on the big stage. Led by Safet Susic, Bosnia & Herzogovina will be no pushovers in this group. They have talented players in their squad and I’m expecting them to go all out for the second spot. Their star player will undoubtedly be Manchester City’S Edin Dzeko and he will be the man to lead the attack. He will be partnered with VfB Stuttgart's Vedad Ibisevic. Ibisevic scored the winning goal against Lithuania in the qualifying group stages to send them to Brazil and he will also play a key role for the Bosnians. Bayer Leverkusen’s Emir Spahic will be captain and he will be partnered with Ermin Bicakcic. Miralem Pjanic, who is having a great season with AS Roma, will be the string puller for the Bosnians and expect him to provide the ammunition for Dzeko and Ibisevic. All of them are playing in the European league but the lack of international exposure might affect their progress in the world cup. However, with their tactical discipline and determination to succeed, the Zmajevi (Dragons) might spring a surprise! 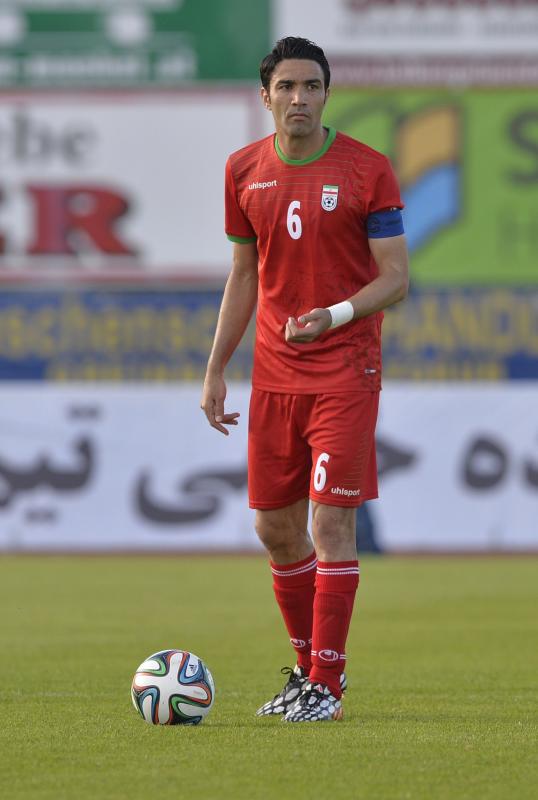 Experienced and talented, Javed Nekounam will be tasked to captain and orchestrate Iran's midfield in Brazil.

Under Carlos Quieroz, Iran has improved a lot. They were top in their group and even beat Asian heavyweights South Korea during the qualifiers. They looked disciplined and showed why they’re one of the best teams in Asia. The likes of Ali Karimi, Mehdi Mahdavikia and Ali Daei may be out of the scene but players like Ashkan Dejageh, Masoud Shojaei and veteran midfielder Javed Nekounam have taken the responsibility pretty well. Nekounam who played in the Spanish League for many years will be the key man in midfield and the 33-year-old is known for his consistency and hard work. Shojaei plays for Las Palmas in the Segunda Division and he will be providing ammunition together with Fulham’s Ashkan Dejageh for the strikers. All these players are big in Iran but when it comes to the world, they’re not well known. The element of surprise is there but facing the likes of Messi, Dzeko and John Obi Mikel can be very intimidating. They will surely rely on Queiroz’s magic to bring them to the next round but they will have to be at their best to beat Nigeria and Bosnia & Herzegovina. 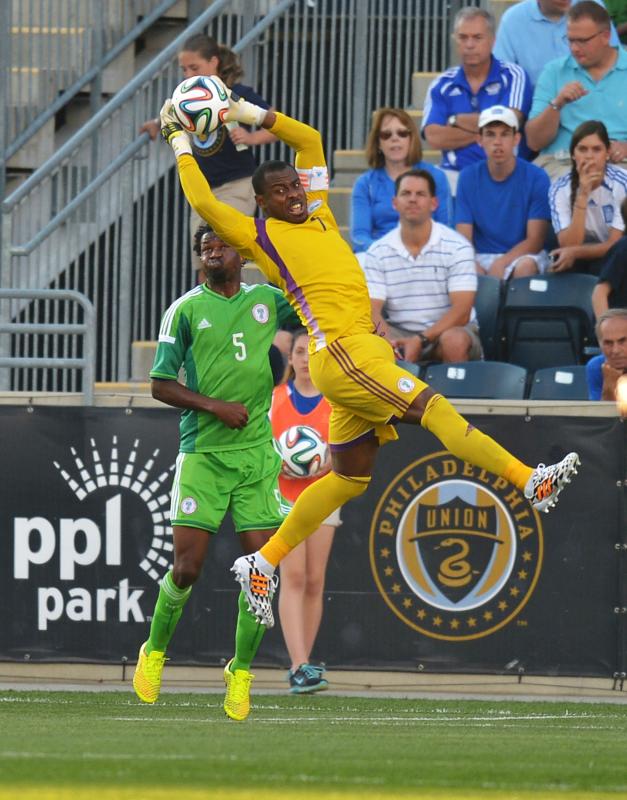 Nigeria's Vincent Enyeama impressed in the 2010 World Cup and expect him to impress in Brazil too.

They won the African Nations Cup last year and should to be buoyed by that success. Many will be expecting them to finish second behind Argentina but Stephen Keshi knows it’s not going to be easy. The current Nigeria group looks strong and most of their players play regular football in Europe. FC Lille’s Vincent Enyeama will lead this side and I’m looking forward to his performances this time. In 2010, he was one of the best African keepers during the tournament and he single-handedly denied Messi when Nigeria lost to Argentina 1-0 in the group stages of that tournament. Joseph Yobo is an experienced centre-back and I’m sure he will be an inspirational figure for the younger players in Brazil. John Obi Mikel will protect the backline while Victor Moses and Ahmed Musa will be the wingers for Nigeria. Super Eagles are known for their hardwork and skills but when they lose their discipline, they can become fowls! Keshi has to remind his players that shouldn't happen if they want to do well in Brazil.

The top spot is for Argentina’s to lose. They are the hot favourites and with Messi hellbent on impressing, teams will find it hard to beat them. It’s hard to predict who will finish second place. Iran, Nigeria and Bosnia & Herzegovina have what it takes to be second but based on experience, I have to say Nigeria will nick the second spot and go to the next round. This will be one interesting group to watch because of the second place competition!
Article type: metered
User Type: anonymous web
User Status:
Campaign ID: 1
Cxense type: free
User access status: 3