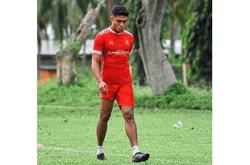 Marlon reacts after scoring the first goal in the 2008 Malaysian Cup final.

I WALKED into Coffee Bean at Empire Shopping Gallery for the second time to meet one of the most feared foreign strikers in Malaysia.

The first time we met, we spoke about foreign players in Malaysia, the standard of Malaysian football and the emergence of young players in the country.

This time, it is likely to be my last meeting with him. ATM striker Marlon Alex James has announced his retirement from football.

When I shook hands with him and exchanged pleasantries , he said, “I love the media people. They are so friendly and I can talk so many issues with them. I just love them!” Marlon celebrates with fans after beating Singapore during a Malaysia Cup match.

Those words were comforting and I thought for a moment - the league is going to lose an influential player and the media will surely miss an affable character.

Many thought this would be his last full season but it was cut short due to injury and he’s decided to step aside and allow ATM to sign another foreign player to bolster the squad.

And that marked the end of his illustrious career. The 38-year-old forward was replaced with 28-year-old Haitian striker Fabrice Noel.

“B.Sathianathan has lots of connections around the world and he was impressed with Noel. He used to be my opponent in the North American Soccer League.

“Noel is fast and will add some flair to ATM’s attack. Hopefully he becomes a vital asset for the team.”

We got down to his post-retirement feelings. 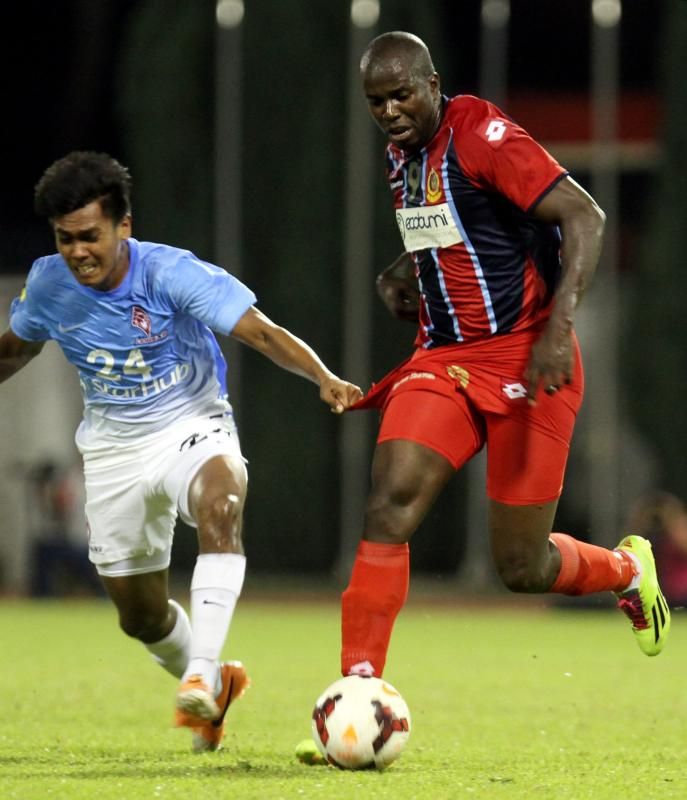 Marlon being challenged by Lion's Firdaus Kasman during a match.

“I’m still experiencing the atmosphere. I go to training sessions and meet the players. It would be nice for me to stay around but at this time, I just want some time away from football and think about the future.

He said he is getting very emotional because he is close to leaving Malaysia and returning to his home town, St. Vincent and Grenadines.

“I’m going to miss some of my good friends here. Saying goodbye is not easy. I share really good relationships with my teammates and friends in Malaysia.

“ATM coaches and management have been loyal and respectful to me. I made the right choice to quit although some didn't agree with it.

“The players are having mixed emotions because when I played for ATM, it became a much better team. They are more used to playing with me under Sathia’s system.

“I can see the love and respect they have towards me and I can’t complain about their efficiency as a team. I’m going to miss them,” adding that Sathianathan is one of the best coaches he has worked with because he has a good relationship with him and Sathinathan is very open to new ideas.

James, who first made his Malaysian League debut in 2004 with Selangor MK Land has garnered a strong fan following especially with Kedah fans.

“Not just fans in ATM, but fans in Malaysia...Oh My God, whenever I’m on the pitch, I can feel the love and appreciation. I love to play in away games because the fans there are appreciative of my talents.

“In Kedah, the fans asked me to play for them for the last time. That was my aim - to retire there but otherwise happened. They have been great towards me,” said James who won the double treble (Malaysian Super League, FA cup and Malaysia Cup) in the 2006/2007 and 2007/2008 seasons with Kedah.

Throughout his time in Malaysia, he was known for his goal-scoring exploits, physical presence and thunder-like shots but during his time here also, he had several grievances which he expressed during the interview. 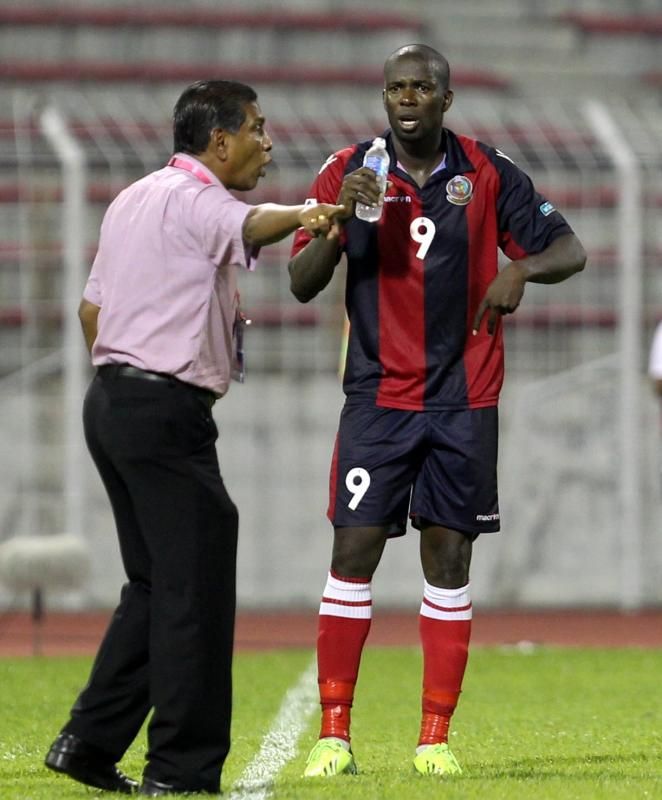 Coach B. Sathianathan gives instructions to Marlon during a match.

“It is giving teams a financial situation. You want to put money into winning the league and not to players who come in for six months and don’t impress at all. This is ridiculous.

“We need the youths to step up. They need to have the mentality of eating, resting and training properly. By doing so, they will improve.

“In Malaysia, some players have poor eating habits. They eat nasi lemak and roti canai for breakfast, it’s not healthy!

“Rather than buying players, you should develop players. In five to six years, you will see the benefits of it. I would love to see a big change in FAM. There should be less talk and more action,” when pressed on what changes, he just said they need big changes.

He also said that refereeing standards have dipped and it is a big problem in Malaysian football.

“In 2008, Subkhiddin Mohd Salleh was the best referee in Malaysia. He was such a good referee. Now, we don’t have someone like him.

“We can’t even question referees these days. Standards have dropped. The quality of refereeing is bad. Some of them commit school boy errors!” he said.

He also spoke about racism in the game.

“People have called me black before. I can’t recall what year it was, when I played against Kelantan, three fans started calling me hitam. They thought I didn’t know what it meant and when I looked at them, the other fans apologised for their antics.

“When we played a pre-season game last year in Perak, I was called monyet by some of the fans. It’s upsetting but you have to get on with the game,”

He said Malaysia needs people who dedicate their life to football and shouldn't just go for the money.

“I will come back to Malaysia and contribute to Malaysian football. I just love it in here. I would love to do youth development.

“Before I leave Malaysia, I would love to talk to Minister of Sports (Khairy Jamaluddin) and Johor Prince (Tunku Ismail) about football. They are concerned about the development of football in Malaysia. I would love to speak to people with fresh views and they have it,” 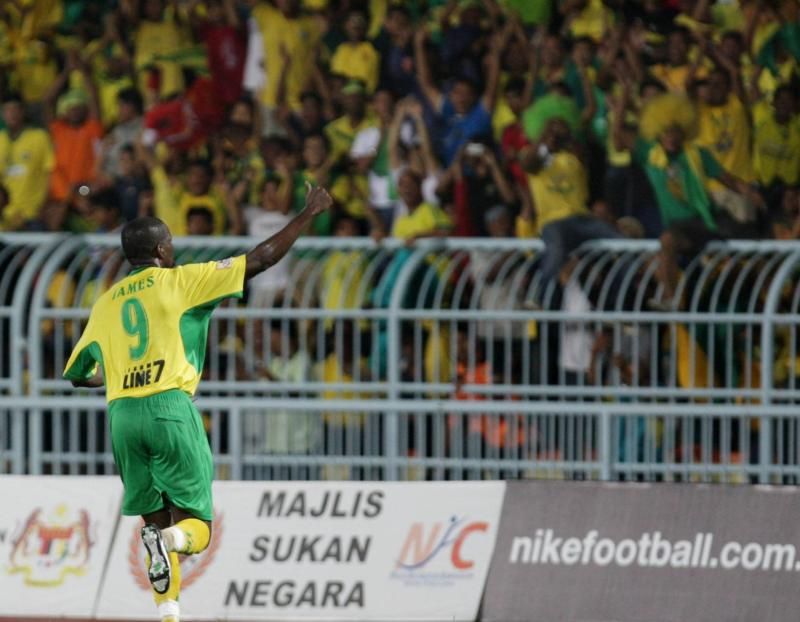 Marlon gives a thumbs up to Kedah fans during a Super League match.

“One person I really admire is Luciano Figueroa. He played high level football before in Argentina and England and even featured in the Olympics in 2004. The professionalism and attitude that he shows is a magnificent example of how foreign players should be in this league.

“I hope they (JDT) keep him around for a long time. They should centre the squad around him,” said James who mingles often with other foreign players like PKNS FC’s Karlo Primorac, his teammates Bruno Martelotto and Juan Manuel Arostegui and Pahang’s Dickson Nwakaeme.

The toughest player he has played against is former Kelantan defender Obinna Nwaneri but he joked, “I scored many goals against his team, especially when he is playing,”

“Jokes aside, he makes me work harder than any other defenders that I've played with. I also loved playing against Lions XII. Because it feels like Malaysia vs Singapore. The rivalry is insane.

“Not to forget Kelantan too, the atmosphere is just amazing. It gives you an extra impetus to perform better,”

For now, he will be going to his hometown and is looking forward to see two of his daughters, Malaya and Azura.

“Malaya is always asking me when are you coming back and so on. I’m really looking forward to see her,”

He has that humble Caribbean vibe in him and you will always feel comfortable when you meet him. He will be missed by Malaysian football.


Thank you Marlon for those good memories...We will miss your goals and celebrations! 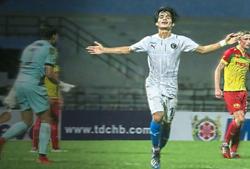