WINNING the 2010 AFF Suzuki Cup was certainly a highlight in our illustrious football history. After the victory, interest in local football increased.

The man behind the success Datuk K.Rajagopal was hailed by fans and people were dreaming of bigger things from the national team.
Players like Safee Sali, Safiq Rahim and Norshahrul Idlan Talaha were the talk of the town and the team were on a roll until they hit the decline in 2011.
On July 28, 2011, I was at Bukit Jalil Stadium when Malaysia were beaten by arch-rival Singapore 6-4 on aggregate after a tense 1-1 away draw.

After the final whistle, the players and management cut a desolate figure while the Singaporeans were celebrating their qualification to the third round. 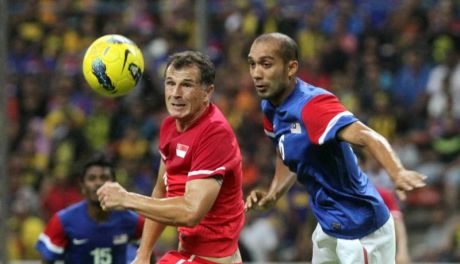 Rajagopal was a disappointed man but the man known as ‘King Raja’ vowed to bounce back for the 2015 Asian Cup qualifiers and 2012 AFF Suzuki Cup.
However, things didn’t go according to plan as we couldn't retain the Suzuki Cup and now we are set to lose out a spot for the 2015 Asia Cup at Australia.
Some fans and critics urged FAM not to renew his contract and they got their wish when FAM announced that his position will be taken over temporarily by Harimau Muda coach Datuk Ong Kim Swee.
It wasn't a surprise as expectations got the better of him. He is a good coach but his selections and tactics can be questioned at times.

I interviewed three of his charges, Amirizdwan Taj Tajudin, S.Subramaniam and Gary Steven Robbat and get their thoughts on him. “As a coach, I think he has contributed a lot for Malaysian football,” said the player who joined big spending side JDT FC for next season’s Super League challenge.

Young midfielder Gary Steven Robbat said that he was good coach and someone he will never forget in his life.

“He is the reason why I’m playing for the national team and would like to thank him for improving myself as a footballer.
“For me his departure is a big loss to Malaysia. The players learnt a lot from Rajagopal and I truly believe, he can create quality players,” said Robbat.

Amirizdwan said that Rajagopal’s departure is a big loss to our football as he was the one who brought back the fanfare for Malaysian football after winning the SEA games gold medal in 2009 and the AFF Suzuki Cup in 2010. After the lost against Singapore in 2011, things took a downward spiral and people say that Rajagopal should shoulder the blame but Amirizdwan say this is part and parcel of football and luck wasn’t on his side.
“It’s a normal thing. Winning or losing, is part of any sport. We can’t win every game but rest assured, we tried our best for every game. Luck wasn't on his side,” said the tall defender.
For Subramaniam, he felt that the coach gave his all unfortunately the latest results didn’t favour him.
“He delivered what other former national coaches couldn't do. He managed to win the AFF Suzuki Cup and SEA Games gold medal for the national team.
“He can’t be the main reason for the defeats.He trusted some of the players but they failed to produce the results for him,” adding that Rajagopal will always be remembered as one of the most successful coaches in Malaysian football.
For now Kim Swee will be the man handling the national team but Subramaniam hopes to see a foreign coach leading the national team.

“We have to keep improving if we want to do well in the international arena. You will always be remembered Datuk!

The progress of the current national players is stagnant because they are too comfortable of their position in the squad.

“We need a brand new coach who not only cares about the performance on the field but also off it,” he said.

Amirizdwan said that the new coach replacing Rajagopal should have their own advantages and bring the national squad to another level.
“Whoever the replacement, I will surely prove my abilities to the new coach. If selected, I will do my best to help Malaysia succeed in the international arena,”
Subramiam said that Kim Swee is key for youth development as he has produced many talented young footballer like Mahali Jasuli, Irfan Fazail and Fadhli Shas.
“Kim Swee should be the permanent coach one day but now is not the time for him to take over the national squad,” added Subramaniam.

King Raja has contributed a lot to Malaysian football. As a fan, I would like to thank him for the memories of 2010 AFF Suzuki Cup and 2009 SEA games gold medal. You will always be remembered Datuk!