The dark side of horse racing 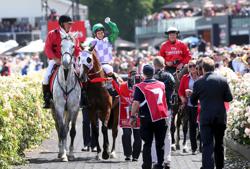 HATS, pretty dresses, suits, and horses. That is a summary of what goes down at the Melbourne Cup, a day that has been declared a public holiday for the state of Victoria, Australia due to the horse race.

Yet, behind the glitz and glamour there is a dark side involving whips, death, and pain.

Despite having the first female jockey win the race on Tuesday, this year’s Melbourne Cup still saw a horse collapse.

Thankfully, the horse, Red Cadeaux, which was pulled out of the race after suffering an injury to its left fore fetlock, survived surgery and is said to be “doing well”.

However, the incident can’t help but remind me of last year’s tragic Melbourne Cup deaths where two horses died soon after the race.

An autopsy conducted the next day found that the horse had suffered from a heart attack – showing the enormous physiological stress these horses undergo.

Another horse – Araldo – was euthanised after it shied at a flag being waved in the crowd and fractured his cannon bone.

The Coalition for the Protection of Racehorses (CPR) claims that since the 2014 Melbourne Cup fatalities, at least 115 horses have died on Australian racetracks.

This number is a slight decrease from the previous year when 133 horses died.

But still, that means that on average, a horse died on an Australian racecourse every 3.2 days this year.

I never really understood the thrill of Melbourne Cup. I studied in Melbourne for two years, but I never bothered going to the races.

Why would I want to see horses being whipped and pushed to their limit?

I didn’t see the pleasure in seeing jockeys race horses around the field, while people place bets, watch the horses get whipped, while sipping on a glass of bubbly.

According to CPR, the suffering of racehorses starts at an early age when they are separated from their mothers at six-months to begin training.

CPR says that a foal will be “broken” – meaning it will be taught to comply with human commands through learned helplessness techniques – which compels the horse to obey due to fear, pain or both.

If the horse fails to comply, it will be discarded.

Many horses suffer injuries before their first race, as running at high speeds over long distances is not natural to horses.

As a result, pain and fear are used to force the horse into submission. Various devices and methods, some legal and some illegal, will give the horse no option but to comply to the demands of the trainer.

And when racehorses are not training, they are confined to a stable where they will spend up to 22-hours per day unable to socialise with other horses.

In this artificial environment, many horses will develop symptoms of neurotic behaviour like wind sucking (grasping an object by the teeth and sucking in air) and weaving (swaying the head, neck and forequarters from side to side). They will also suffer from many common illnesses like stomach ulcers and respiratory diseases.

The average racehorse will race for less than 3 years before being discarded. CPR claims that many will be sent to sale yards where most are bought by knackeries.

While some ex-racehorses find loving and caring homes, the vast majority will be killed after their careers come to an end.

Other than the sad life of racehorses, the thing I disagree most with is the whipping.

The purpose of the jockey’s whip is to make the horses run faster and to instil fear in them to keep moving even when they are exhausted.

CPR says that whipping the horses over and over again inflicts physical and psychological pain and increases the likelihood of injury.

And experts and activists also question if whipping is actually effective. Surely the cruelty should outweigh any advantages.

I feel that the horse racing industry should place a ban on this cruel practice.

Why can’t jockeys ride horses without whips? Surely they don’t need it to control a horse.

I don’t agree with causing pain and fear to the horse (or any animal) to win a race. 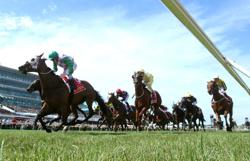