HE WAS laid out in on the brown Zimbabwean dirt, his head barely upright, with his eyes closed and mouth slack. His signature jet-black mane was dusted by dirt, his large paws embedded in the ground - and the crossbow that was used to kill him was propped up at his side.

His killer and guide smiled triumphantly, as they posed by the lifeless lion.

But the dead lion wasn't just any lion - it was a lion named Cecil, a major tourist attraction at Zimbabwe's Hwange National Park. 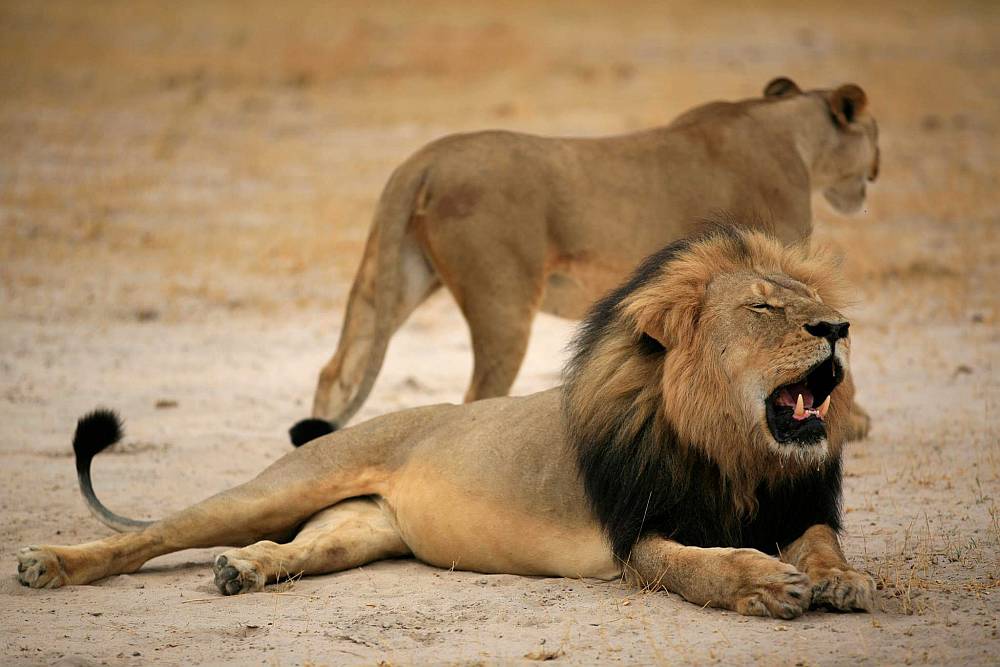 According to the Zimbabwe Conservation Task Force, the 13-year-old lion suffered a slow death when it was lured out of the animal sanctuary and shot with a crossbow last month.

Cecil lived on for nearly two days before he was tracked down and shot with a gun. He was then skinned and beheaded.

The hunters then tried to destroy the GPS collar Cecil was wearing as part of the research project that was backed by Oxford University.

American dentist Dr Walter J. Palmer has been implicated as the hunter that shot the famous lion, and has since gone into hiding following the onslaught of criticism after the killing of Cecil the lion went viral.

"I had no idea that the lion I took was a known, local favourite, was collared and part of a study until the end of the hunt," said Palmer in a statement.

"I relied on the expertise of my local professional guides to ensure a legal hunt," he said.

Two Zimbabweans have been charged for poaching in Zimbabwe court and have been released on US$1,000 (RM4,000) bail each.

"I regret shooting a lion called Cecil, that was never the intention. I didn't know he existed," Bronkhorst told NBC News.

"Any other lion, I don't think it would have been a problem."

He explained that he believed he had the right hunting permit and that the charges he faced were "frivolous".

"(Hunting) is an integral part of our country and it's got to continue. If we do not use wildlife sustainably, there will be no wildlife," he said.

It is hard to believe how hunting has changed over the years, what use to be a form of protecting their communities and feeding their families has turned into a prestigious sport carried out by the wealthy.

Big game hunting is the hunting of large animals that is historically associated with the hunting of Africa's Big Five - African elephant, lion, Cape buffalo, leopard and rhinoceros.

The controversial sport still exists in many parts of the world today, but the activity has recently garnered lots of criticism by animal lovers and animal activists.

Many who pursue big game hunting usually only keep their trophies, which is usually the head, pelt, tusks of an animal, which is then displayed as a sign of prowess.

Recently, many hunters seen posing for pictures with their kills have been hit by criticisms on social media.

In wake of Cecil's killing a big-game trophy hunter Sabrina Corgatelli, who is an accountant for Idaho State University, appeared on NBC's Today show to defend trophy hunting amid mounting international outrage over last month's killing of Cecil.

"Everybody thinks we're cold-hearted killers and it's not that," Corgatelli said in the televised interview.

"There is a connection to the animal, and just because we hunt them doesn't mean we don't have a respect for them. Giraffes are very dangerous animals. They could hurt you seriously, very quickly."

However, her comments and photos of her online flaunting the carcasses of a giraffe and other wildlife she killed during a recent guided hunt in South Africa received criticism.

I personally cannot justify killing endangered or rare animals for sport. I feel it's cruel to kill these animals for bragging rights or so you can admire their carcass on your wall.

Critics also say that it is a form of animal cruelty, especially if the hunter does not make a clean kill.

I also have doubts about how hunting fees benefits the local economy.

In an opinion piece by Jeff Flocken of the International Fund for Animal Welfare, he states that "despite the wild claims that trophy hunting brings millions of dollars in revenue to local people in otherwise poor communities, there is no proof of this".

Even pro-hunting organizations like the International Council for Game and Wildlife Conservation have reported that only 3% of revenue from trophy hunting ever makes it to the communities affected by hunting.

The rest goes to national governments or foreign-based outfitters.

Another concern is over-hunting and inaccurate quota numbers that determine the number of animals that can be killed to ensure a sustainable animal population.

There have been many concerns that the quotas are not realistic, and that population estimates are lower than what is estimated.

What will happen if the lions and animals continued to disappear? These animals are what attract tourists to the country - and if the animals are gone, it will surely impact the African economy.

If these hunters claim that they want to conserve the animals, why can't they channel the funds into conservation projects or help the African communities directly?

I don't know about you, but I'd rather pay money to watch wild animals in their natural habitat than pay money to kill one.

I would like to end this piece with a quote by Victorian dramatist W. S. Gilbert: "Deer-stalking would be a very fine sport if only the deer had guns."