Saving the broken and forgotten

Puspa with one of her rescued dogs named Longkang.

IT has been a tough journey for Puspa Rani who gave up her career as a chartered accountant to set up and run Malaysia Independent Animal Rescue (MIAR), a non-governmental organisation dedicated to giving a home to stray animals.


But the 38-year-old who is a wife, mother to three girls, and an animal lover, still finds the strength to continue rescuing abused and homeless animals.

“All the dogs under our care are abandoned, some were tortured, and some were rescued from the pound and were about to be put to sleep,” said Puspa.

“What I do is important. Each and every dog we rescue has a story, most of them are supposed to be dead, but they are still here and they’re happy.”

“Just looking at how happy they are, and seeing how far they have come since we took them in motivates me to keep doing what I do,” she said.

Puspa said that she always puts the animal before herself and would go through great lengths to rescue an animal in need.

“I only have the wellbeing of the animal in mind. I want to give them all a loving home. They deserve to be loved,” she said.

Even what Puspa was seven-months pregnant, nobody could stop her from helping to carry a dog through four-feet high floods so that he could reach safety.

“I just wanted to help the dog, I didn’t care what everyone else said,” she said with a laugh. Her big heart and love for animals is what prompted her to open up a shelter for rescued animals. Jonah was in a really bad state when Puspa found him, and was recommended to be put down. But he is now recovered and living happily at MIAR's shelter.

“MIAR used to be just a Facebook page, and I would rescue dogs around Kajang area in my own time. But then it became much bigger and people wanted my help to rescue animals from places further away,” said Puspa.

She started rescuing more and more dogs and started to rent a house when she started to take in dogs from the pound who were about to be put down.

“MIAR’s shelter will soon be three-years-old in February. The dogs here are happy and are let out at least twice a day to run about and play,” said Puspa.

There are currently over a hundred dogs at the shelter that are being taken care of by Puspa and three workers on a daily basis. “We also have volunteers who come in to help wash the dogs on the weekend,” she said. 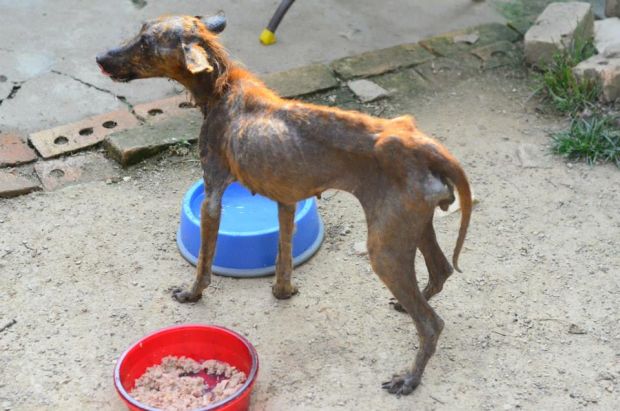 Longkang had a maggot infested wound and severely underweight when she was rescued from a drain.

There is a lot of work that goes into caring for the dogs at her shelter, and Puspa said that taking care of the dogs has become her full-time job.

“I sleep late, wake up early to feed and care for the dogs, and I receive calls almost every day,” said Puspa, adding that sometimes people would even dump dogs at her shelter just to get rid of them.

However, Puspa said that with so many dogs under her care she is often worried that she would not have enough food to feed all the dogs who polish off 38 chickens a week and 60 bags of rice a month.

“All the dogs we have consume a lot of food, and we rely on the kind donations people to feed the dogs,” she said.

“Some months I worry that we do not have enough,” she added.

On top of food, medical and veterinary bills are another burden Puspa has to worry about.

“I try to dress and treat the wounds myself. But if it’s a more serious injury a vet will have to handle it,” said Puspa.

“Antibiotics and other medicines also cost a lot,” she adds.

Puspa’s employee at the shelter Paskaran who has been working at the shelter for two years, said that Puspa has the “miracle touch” when it comes to injured animals.

“I have seen many dogs with really bad injuries and she takes the time to care for them and they eventually get better,” said 45-year-old Paskaran.

He said that Jonah was the biggest miracle.

"The vet said that he would die in three days, but Puspa brought him back and took care of him. She helped him with therapy sessions and exercises and how he can walk.”

“I am sure that if dogs could speak, they would thank Puspa with a full heart,” he said.

Upon hearing Jonah’s name, Puspa said that when she saw him for the first time, he “broke her heart”.

“It was a long time since I cried, but I cried looking at that dog. I remember thinking what was wrong with the world for people to just look at him and not do anything. They just watched him suffer and ignored him,” she said.

“He was paralysed and stiff, he couldn’t even stand up. He had distemper in stage four and could not eat or drink by himself because he had no control over his tongue.”

She said that they had to hand feed him, change his diapers, and helped with his therapy and exercises.

“It was a miracle when he started to walk, that shut everybody up. He’s a survivor,” she said.

When I see Puspa look at the dogs at her shelter, I can see that she sees them as her family.

Not everybody can handle all the cruelty she has witnessed over the years and it's also sad to find out that she receives so much hostility from humans.

She told me that she had problems with abusive pet owners in the past as well as “haters” who do not support her rescue efforts, and that one even poisoned her dog.

“I don’t care about what people say because the dogs look up to me and that’s all that matters,” said Puspa.

“I know that I can’t help all the dogs out there, because I can’t be everywhere. But I do the best I can to save as many as I can out there,” she said.